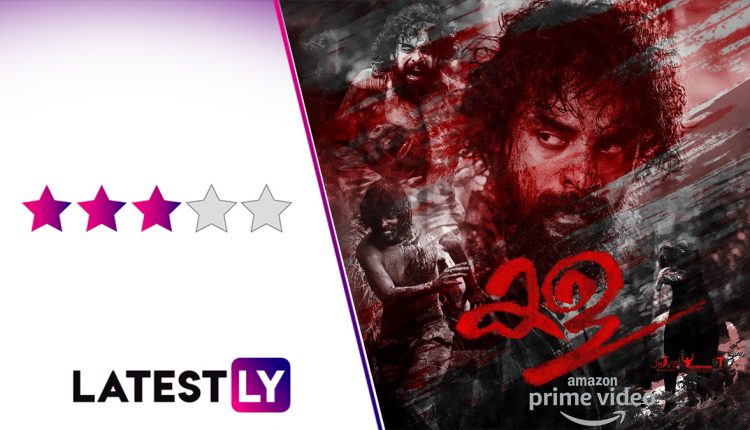 Kala Movie Review: It is important to point out that debutant Rohit VS’ Kala is set just around the fag-end of the ’90s. It was an era when India was chest-beating in being a nuclear superpower. It was the time when the Kargil war happened, and the nation was drunk high on valour and patriotism. It was also the time when Malayalam cinema was being ruled by meesha-pirippu movies, where higher-caste feudal heroes like Jagannathan and Induchudan made a mass statement with their masochism. Tovino Thomas Gets Injured On The Sets Of Kala, Malayalam Actor Admitted To The ICU.

Shaji (Tovino Thomas) is a clear reflection of that era. Or at least that he wants to see himself to be. He is particular about his looks and physique. He is vain about his privilege, his mansion and his dog that, as he proudly points out, belongs to an international breed called Cane Corso. When his son cries over something, he tells his kid that ‘boys don’t cry’, and makes the kid watch Jackie Chan movies. He is assertive in his amour towards his wife (Divya PillaI), whom he loves very much.

Yet for all his display of testosterone, Shaji (is it me or is the name tribute to the filmmaker responsible for massy movies in the ’90s, Shaji Kailas?) is wary of his inadequacies. Even though his house is named after him, Shaji is merely under the thumb of his autocratic father (Lal). He is reminded of his many failures that has cost losses in their finances, not just by his father but also by his friends. When his wife asks him to peel onions, he gives her a look as in ‘Say what?’, before he does it for her.

A desperate need to make more money arrives one day for him, the very same day some labourers come to work in his plantation, one of them holding a vicious grudge against him.

The first half of Kala feels like a ticking time-bomb, that we are not sure where, when and who would set it on ignition. The flashy cuts and the pacy BG score keep every scene under a scanner, though all the first half does in establish the routines of Shaji Niwas’ suffocated inhabitants within the span of a day. We know the trouble is around the corner and is about to arrive. Shaji is up to something against his father, his wife Vidya is worried about something, and their son is scared of the labour supervisor Mani (Pramod Velliyanad), because he thinks Mani is a ghost.

We expect the bomb to be fit within the cracks between the relationship Shaji and his father, that was reminiscent of Prithviraj and Ranjith’s equation in Ayyappanum Koshiyum.

However, just like how AK was about two men brawling over their egos and not a father-son story, similarly Shaji meets his nemesis in a Tamil labourer (Sumesh Moor) who is on a revenge mission for something Shaji has done in the past. Hint: Hathoda Tyagi would be proud of what he is upto here!

I don’t remember Shaji’s foe ever given a name in the film. We know he is a Tamil tribal. His appearance is unkept and his behaviour is perceived to be fierce. If this was a Malayalam film from the Aaram Thampuran era, the lines would be clearly drawn about who we are to root for between the fair-skinned feudal lord or the dark-skinned ‘outsider’. And here’s where the young director takes a turn with his characters.

While having lunch with his workers, Mani tells them how (looking towards Shaji and his house) ‘they’ have thrown Mani’s ancestors from their lands and coveted them, only to now make them as their labourers. That one scene makes us question who the hell is the real outsider in this story. Tovino Thomas Birthday: 7 Pictures That Prove He Is a Doting Father to His Daughter Izza and Son Tahaan.

Kala (the title means ‘Unwanted’) is not an ode to those meesha-pirippu films I had mentioned earlier, rather it feels like a incisive commentary on the saviour complex that such movies perpetuate. There is a scene where Shaji, when battling his enemy, calls him a casteist slur. It would shock you for that moment, but it is also a casual reminder of how mainstream movie heroes have often used casteist slurs as punchlines. Well, didn’t you clap when Suresh Gopi used ‘Pannu Pol***di Monne!’?

In the second half, where the film goes way bloody and brutal, the long-drawn fight sequences arrive back to back. Bones are broken, scars are made, the fights almost turns to cold-blooded murders, but the foes refuses to quit. At one point, I got nauseous over the scenes as I was not sure if the fight scenes are testing my patience, or I was disgusted at the extremes the two characters go on to score a winning point.

By then, the equations are reversed, the lines between the hero and the villain get blurred before those are redrawn now changing sides, and by the end, we can only feel a disgusted pity towards the beaten man, just like Vidya shows on her face.

It is quite a bold move on the part of Tovino Thomas (also the producer) to take on such a character that destructs the very idea of being an alpha male. He is an actor known for his good looks and his physique, and Kala’s first half gives him opportunities to go shirtless to display his machismo. However, by the time Kala is done with Shaji towards the end, he is a bloody mess who has a shirt on, but loses his lungi in the process. It is not a nice sight, and definitely not as massy as Aadu Thoma made it look in  Spadikam.

The revelation of the film is undoubtedly Moor, who even gets (and rightly) the top billing in the star-cast during the end-credits. For isn’t that always reserved for the hero? This is an absolutely feral performance from the young actor, fantastically turning his character into a warrior of the nature.

– A Brutal Commentary on Alpha Masculinity

Kala is animalistic in its violence, rough in its language and raw in its emotions, and yet it ends on a serene image of a man and a beast walking together into the nature. The bouts of violence may feel unbearable at times, but the movie uses its high passions and gory visuals to draw out its message for you. Kala is streaming on Amazon Prime Video.

(The above story first appeared on Scoop Buddy on May 20, 2021 09:23 PM IST. For more news and updates on politics, world, sports, entertainment and lifestyle, log on to our website scoopbuddy.com).