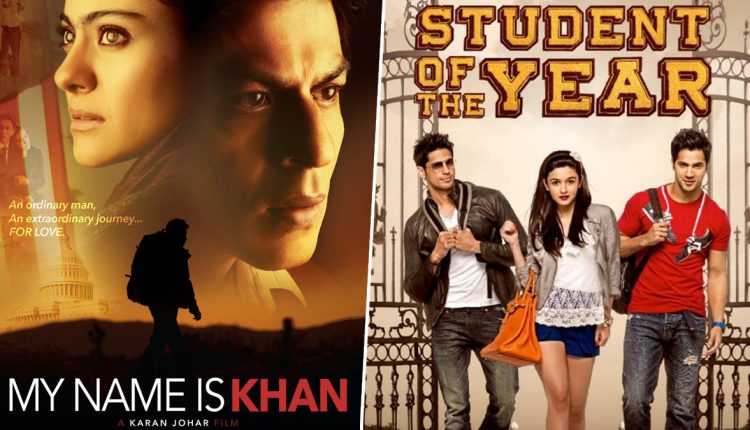 Karan Johar Birthday Special: From My Name Is Khan To Student Of The Year: Ranking The Director’s Movies As Per IMDb Ratings

Karan Johar celebrates his birthday today. While he is an agile producer, he seems to be a reluctant director. Why do we say so? Since his debut with Kuch Kuch Hota Hai in 1998, the filmmaker has directed only 9 movies including his shorts in the anthology series. For someone who has been hailed as one of the best of his generation, this definitely makes us quite sad that KJo keeps his directing flair to a minimum. The reason it bothers us is that despite being a person who believes in larger-than-life canvases, the director has made a few movies that are close to our hearts. Some are pure nostalgia while others are fine. An entire generation resonated with Kuch Kuch Hota Hai in 1998 and then Student Of The Year in 2012, despite both the films being deeply flawed. Free: Karan Johar Announces Film on Sri Sri Ravi Shankar on the Occasion of the Spiritual Leader’s Birthday!

So today, on his birthday, we thought of telling you about how users on IMDb ranking of Karan Johar’s directorials.

My Name Is Khan

Now, this isn’t surprising to see this Shah Rukh Khan-Kajol film on top although when Karan attempted it back in 2010, many were shocked. It was unlike anything that his movies associated with. A hero with Autism, a single mother heroine, the Hindu-Muslim feud and much more.

Again no surprises there. Adulting was taught to us for the first time by KKHH. People still fight over how Rahul chose svelte Tina over tomboyish Anjali when he wasn’t even in love with the latter. Debates and discussions are still raging.

It’s all about loving your family became the go-to sentence for all when K3G released in 2001. It is still remembered for the boisterous character of Poo played by Kareena Kapoor. But it was the conflicting yet heart-wrenching relations between the members of the Raichand family which made this film a superhit. It worked well that it had three of the biggest stars in the history of Bollywood in one movie – Amitabh Bachchan, Shah Rukh Khan and Hrithik Roshan.

Many believe KANK is one of Karan Johar’s finest. But we differ and so do users on IMDb. While it’s impressive that Karan made a movie on extra-marital affairs in 2006, the movie couldn’t get its point across. Shah Rukh’s anger after a while made no sense, even his love story with Rani Mukerji was very conveniently done.

Ae Dil Hai Mushkil has divided movie-lovers. While many just loved the one-sided love being depicted by Ranbir Kapoor, others found it quite clingy at the way RK’s character dealt with Anushka Sharma. Unfortunately, the movie stretched the one-sided love to such an extent that people lost interest. Karan Johar Wants To Go On A Dinner Date With Oscar-Winner Actress Meryl Streep

Student Of The Year

Student of The Year was targeted at the millennials in 2012 and they lapped it up. From snazzy Alia Bhatt to hot Sidharth Malhotra to handsome Varun Dhawan, Karan Johar presented them really well. In fact, SOTY still had some finer nuances in the script despite being quite absurd and unrealistic.

(The above story first appeared on Scoop Buddy on May 25, 2021 12:00 AM IST. For more news and updates on politics, world, sports, entertainment and lifestyle, log on to our website scoopbuddy.com).