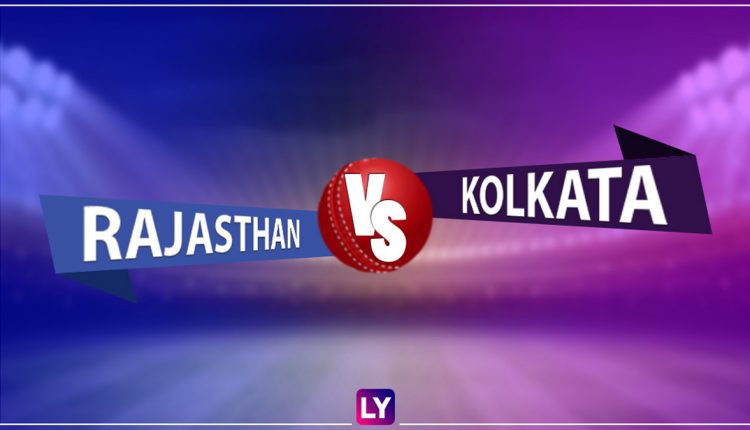 OUT! Gone, Shubman Gill is run out by Jos Buttler and KKR have lost their first wicket. Gill, who was struggling to find the gaps, was edgy after playing a number of dot balls in the powerplay. He plays a yorker from Mustafizur Rahman towards mid-off and sets off for a single. But Buttler got quickly to the ball and hits the stump with a sharp throw. Shubman Gill run out (Buttler) 11(19)

Jaydev Unadkat and Chetan Sakariya have kept tight lines to Shubman Gill and Nitish Rana and prevented the KKR opening pair from making use of the powerplay and finding regular boundaries.

The toss from the middle is Rajasthan Royals captain Sanju Samson has won the toss and elected to field first. Rajasthan Royals have made two changes to their playing XI with Yashasvi Jaiswal and Jaydev Unadkat replacing Shreyas Gopal and Manan Vohra while KKR have included Shivam Mavi.

Hello and welcome to our live coverage of the Rajasthan Royals vs Kolkata Knight Riders match. Both teams are desperate to win and get themselves back on track in the race to reach the IPL 2021 playoffs. KKR have lost their last three matches while RR have faced defeat in their last two. Meanwhile, stay tuned for live score updates and commentary. Toss report is coming your way soon.

RR vs KKR Live Score: Rajasthan Royals (RR) and Kolkata Knight Riders (KKR) will hope to get back on track in their IPL 2021 campaign when they face each other in match 18 of Indian Premier League season 14. Both teams enter this clash after winning just one of their first four games in IPL 2021 and find themselves at the wrong end of the IPL 2021 points table. RR are at the bottom of the table while KKR are in the penultimate position and both are with a negative run rate. Both teams need to start winning to keep themselves alive to make the IPL playoffs. Meanwhile, stay tuned for the live score updates and commentary for the RR vs KKR match. RR vs KKR Preview: Likely Playing XIs, Key Battles, Head to Head and Other Things You Need To Know About VIVO IPL 2021 Match 18.

Rajasthan Royals’ only win in IPL 2021 came against Delhi Capitals. They nearly beat Punjab Kings in their season opener, lost by four runs, but were completely outplayed by both Chennai Super Kings and Royal Challengers Bangalore. CSK beat them by 45 runs while RCB chased down 178 against Rajasthan in just 17.6 overs without losing a wicket. The Sanju Samson-led side have been inconsistent in both their batting and bowling and need to quickly organise themselves or watch the season slip away. RR vs KKR, IPL 2021 Live Cricket Streaming: Watch Free Telecast of Rajasthan Royals vs Kolkata Knight Riders on Star Sports and Disney+Hotstar Online.

It has been quite a similar story for KKR. They started the season with a 10-run win over Sunrisers Hyderabad but have since lost three on the trot. KKR’s top-order looked in great touch in the opening two matches while their middle order struggled. It has been vice-versa in the last two games. The two-time champions need their batting to fire in unison. KKR’s bowling have also been costly with record signing Pat Cummins conceding 58 runs in four overs against CSK.

Fuel through immunity boosters, but remember they are just add-ons, Health News,…