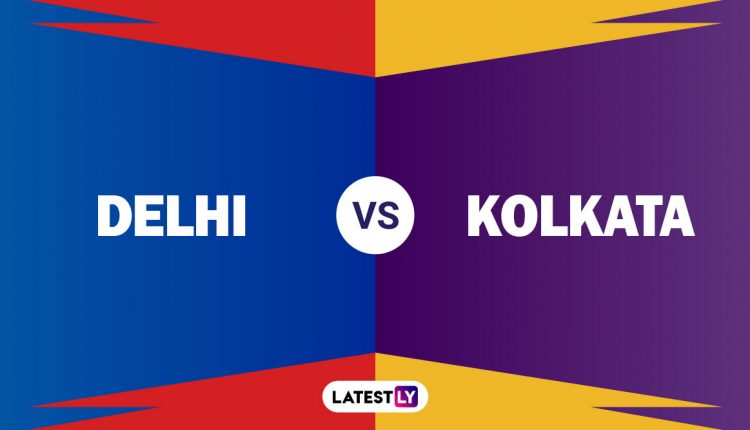 OUT! The middle-order collapses are haunting KKR again. Shubman Gill falls prey to Avesh Khan as Kolkata lose their fifth wicket. Gill had got a start and he really needed to play a substantial knock but he goes for 43 as Steve Smith takes another catch at long-on. Shubman Gill c Smith b Avesh Khan 43(38)

OUT! Two wickets in three balls for Lalit Yadav as Eoin Morgan and Sunil Narine walk back for ducks. First, it was the KKR skipper who couldn’t clear Steve Smith at long-off and then, Narine failed to read a straight and the umpire was happy to accept the LBW appeal. KKR in deep trouble now.

OUT! That’s why you call Marcus Stoinis a utility cricketer. His happy knack of taking wickets continues as Rahul Tripathi falls prey to him. The KKR dasher opened the face of the bat to get the cover boundary but found Lalit Yadav inside the ropes. Second one down for KKR. Tripathi c Lalit Yadav b Stoinis 19(17)

Rahul Tripathi came in after Nitish Rana’s departure and he joined forces with Shubman Gill. The duo has been watchful so far with the scoring rate being just over seven. Meanwhile, the powerplay overs are done and dusted and one can say it’s a shared session.

OUT! Brilliant start for Delhi Capitals as Nitish Rana departs after scoring just 15 runs. Brilliant comeback from Axar Patel after being smashed for a six. The left-arm spinner shortened the length after seeing Rana coming down the track and Rishabh Pant executed a brilliant stumping. First Knight Rider is down. Nitish Rana st Pant b Axar 15(12)

KKR are aiming for a steady start here as Shubman Gill and Nitish Rana have been watchful in the first two overs. Credit must also be given to Kagiso Rabada and Ishant Sharma who have kept things tight with their aggressive bowling. Nevertheless, we’ll surely see some fireworks in the remaining powerplay overs.

The players are out in the middle as the second game of super Thursday goes underway. Shubman Gill and Nitish Rana are the two openers for KKR while Ishant Sharma will start proceedings with the ball.

So, the news from the center is that Delhi Capitals captain Rishabh Pant has won the toss and he elected to bowl first. With Amit Mishra sustaining a shoulder niggle, Lalit Yadav replaces him in the DC line-up. On the other hand, KKR will continue with their winning combination.

DC vs KKR Live Score Updates: Match 25 of the VIVO Indian Premier League will see Delhi Capitals crossing swords with Kolkata Knight Riders. The encounter takes place at the Narendra Modi Cricket Stadium in Ahmedabad on Thursday (April 29). Despite Shreyas Iyer’s absence, DC have made a stellar start to the season under Rishabh Pant, winning four of their first six games. Moreover, a thumping win in this clash could see them advancing at the top of the team standings. On the other hand, KKR havent been exceptional so far this season, winning just two of their first six matches. Meanwhile, stay tuned for the live updates and commentary of the match. Updated IPL 2021 Points Table.

DC’s potent batting line-up has been their biggest strength this season. From Shikhar Dhawan to Shimron Hetmyer, everyone in the top six has got runs under their belt. However, Sam Billings might replace Steve Smith for this fixture to add more firepower. Coming to the bowling, Kagiso Rabada and Avesh Khan have done well in the pace-bowling department, while the spin attack also looks quite formidable with Axar Patel and Amit Mishra in the ranks. DC vs KKR Preview: Likely Playing XIs, Key Battles, Head to Head and Other Things You Need To Know.

Speaking of KKR, their middle-order woes cost them many games this season. However, they registered a comfortable six-wicket win in their last outing against Punjab Kings and would have gained a lot of confidence. Other than that, their top order and bowlers have done quite a decent job. However, they will play in Ahmedabad for the first time this season, and it would be interesting to see how they adapt to the new conditions.