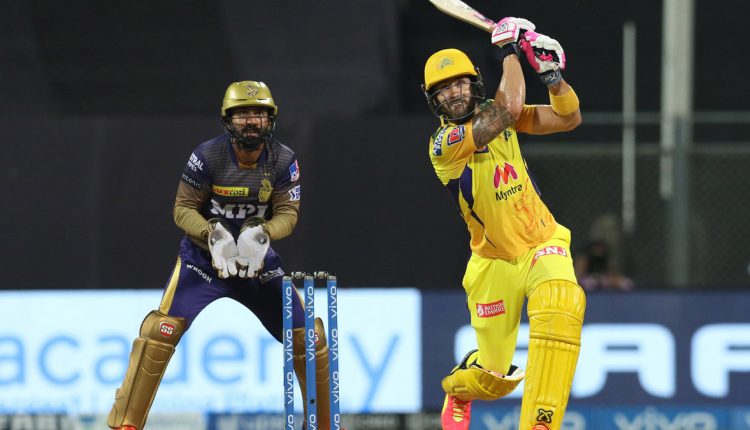 Chennai Super Kings somehow survived a carnage from Andre Russell and Pat Cummins and beat Kolkata Knight Riders by 18 runs to climb to second in the IPL 2021 points table. Having posted 220/3 on the scoreboard after being put to bat first, CSK looked in firm control when KKR were reeling at 31/5 before Russell, Karthik and Cummins rolled on a carnage. KKR needed 20 runs off the final over with only one wicket in hand with Cummins on strike. But Prasidh Krishna was run-out in the first ball leaving KKR 18 runs short. Take a look at the stat highlights from the KKR vs CSK match. KKR vs CSK Highlights of VIVO IPL 2021.

Asked to bat first, Faf du Plessis and Ruturaj Gaikwad gave Chennai Super Kings a perfect start and stitched 115 runs for the opening stand. Gaikwad was dismissed on 61 but Du Plessis went on and finished the innings unbeaten on 95 from 50 deliveries. His knock was studded with four maximums and nine boundaries. Du Plessis’ knock and cameos from Moeen Ali and MS Dhoni propelled CSK to 220/3. Deepak Chahar and Lungi Ngidi then put them in command after restricting KKR to 31/5 inside 5.2 overs. MS Dhoni Smashes Prasidh Krishna for Gigantic Six During KKR vs CSK Match in IPL 2021; Twitterati React in Ecstacy.

But Russell and Karthik fought back with an 81-run stand in just six overs. The momentum seemed to have changed towards KKR when Russell completed a 21-ball half-century. But he was soon dismissed by Sam Curran. Russell’s knock was filled with six maximums and three boundaries. Karthik at the other end also played a handy cameo with a 24-ball 40 runs. It was then left to Pat Cummins to save the blushes for KKR and he nearly took them home with a fabulous 66 runs knock. Cummins scored those runs in just 34 deliveries and remained unbeaten but KKR were left with no more wickets. Take a look at the stat highlights.

The win take Chennai Super Kings to second in the points table. They have won three on the trot while KKR have lost three consecutive matches to drop down to sixth in the standings. CSK have six points from four games while Eoin Morgan’s men have only two points from as many matches.

(The above story first appeared on Scoop Buddy on Apr 22, 2021 12:11 AM IST. For more news and updates on politics, world, sports, entertainment and lifestyle, log on to our website scoopbuddy.com).

Narayani Shastri: I Love Television Industry and Will Choose It Over Movies, Ads or Theatres Any Day

43 Constituencies Go to Polls in Sixth Phase, Fate of 306 Candidates on The Line