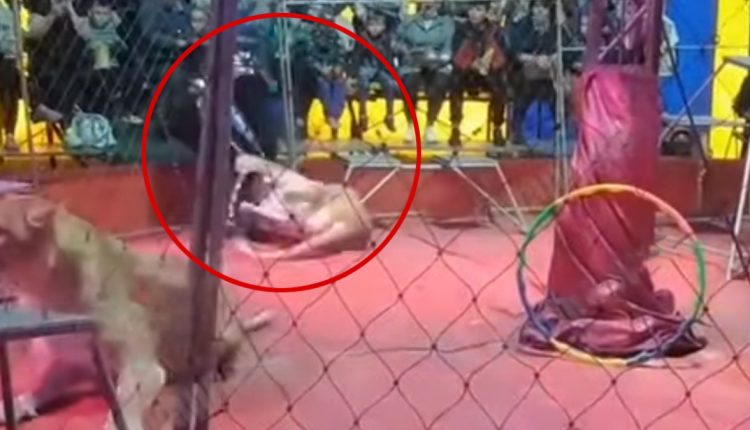 Moscow, May 25: A horrific video of a lioness attacking trainer during performance in circus has emerged online. The attack took place in Russia’s Novosibirsk region. While the trainer survived the attack by the lioness, a pregnant woman from the audience fell ill due to stress after witnessing the incident. The video of the attack is going viral on social media. South African Conservationist West Mathewson Mauled to Death by The White Lions He Raised, Watch His Old Video Describing Them as ‘Fantastic Company’.

In the video, the lioness is seen pouncing on the trainer, identified as Maxim Orlov, during the circus performance. She gnaws his thighs. Orlov uses a stick in his hand and manages to rescue himself the animal’s clutches. However, as soon as he stand up again, the lioness attacks him again and he falls. The other lioness in the closure is also seen attacking Orlov. 3 Mountain Lions Killed in Arizona Because They Feasted on Human Remains.

Later, other circus staff armed with poles rescued Orlov, Sputnik News reported. The trainer lacerations to his arm and leg and was subsequently hospitalised. A pregnant woman from the audience, who witnessed the attack, became unwell due to stress, local media reports said. “Instances such as the one today are very rare. But animals are animals,” Orlov was quoted as saying.

“We will negotiate with the zoos to exchange her for a little lion cub,” he added. The attack triggered panic among the spectators. “The lionesses went berserk,” a witness, identified only by first name Viktoria, was quoted as saying. “When we ran away, there was a wild roar from the animals. The tamer was attacked” she further said.

(The above story first appeared on Scoop Buddy on May 25, 2021 01:30 PM IST. For more news and updates on politics, world, sports, entertainment and lifestyle, log on to our website scoopbuddy.com).

Indians Wish to Work From ‘Third Place’, Say No to Work from Home or Office: Survey