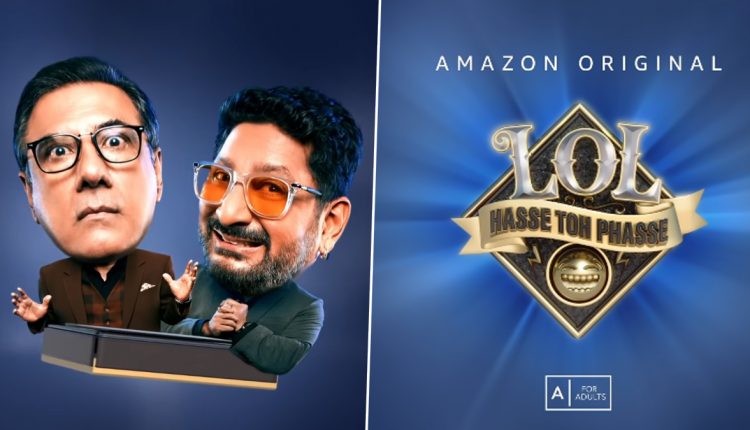 Actors Arshad Warsi and Boman Irani launched the trailer of the upcoming comedy show LOL Hasse Toh Phasse on Tuesday. The two actors will host the comedy show. “In time like this, shows like these keeps people indoors, which is a safe place. My advice it, watch it, stay home and stay safe. You can’t have anything better than this. I think this is a medically certified show!” Arshad told IANS. LOL – Hasse Toh Phasse Trailer: Arshad Warsi, Boman Irani Bring a Fun Game With Standup Comedians That Takes a Drastic Twist (Watch Video).

Boman added: “We should be staying at home. Staying safe in these grim times is the most important. Everybody is exchanging whatsapp messages. Take it easy guys! You should do your best, try and lighten the mood. I think it’s important that these wonderful talents of the show will really lighten your mood. You can sit back and keep watching it again and again. It’s nothing but medicine and entertainment.” LOL- Hasse Toh Phasse: Amazon Prime Video Announces New Comedy Series Featuring Arshad Warsi, Boman Irani, Sunil Grover Among Others (Watch Video).

The unscripted show is Indian adaptation of the Amazon Original series “LOL”, where ace comedians live together for six episodes. The challenge for the participants will be to not laugh and anyone who does gets evicted. This show will feature comedians Aadar Malik, Aakash Gupta, Aditi Mittal, Ankita Shrivastav, Cyrus Broacha, Gaurav Gera, Kusha Kapila, Mallika Dua, Sunil Grover and Suresh Menon as contestants.

Talking about the USP, Arshad says: “When you watch the show, you realise that all these talented people are in one frame. You’re looking at someone and someone else behind is doing something so hilariously funny. You’ll have to watch the show again and again from each contestants point of view.”

Boman Irani adds: “We had 20 screens to look at and the audience just has one. People go back and forth and there’s so much going on in one frame, it’s fantastic.” LOL: Hasse Toh Phasse, a one-of-a-kind laughter survival show premiering on April 30, on Amazon Prime Video.

(The above story first appeared on Scoop Buddy on Apr 20, 2021 09:08 PM IST. For more news and updates on politics, world, sports, entertainment and lifestyle, log on to our website scoopbuddy.com).

Why Millennials Are the Purpose-Led Leaders of the Future