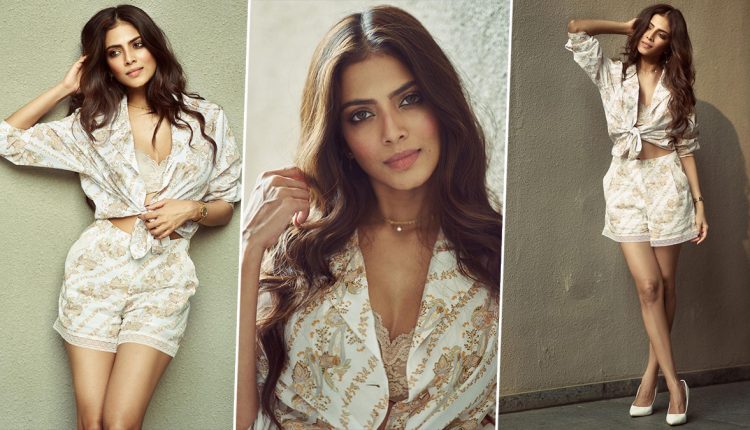 Malavika Mohanan Shows Us How To Elevate Everyday Style With White Paisley!

Malavika Mohanan’s promotional spree for Master saw her stir up a sublime style featuring white paisley print. The ensemble featuring a bustier blouse and shorts from the Australia based label, We Are Kindred had us hooked! She enlisted the styling precision of fashion stylist Pranita Shetty. On the fashion front, Malavika is a style cynosure. The media graduate’s keen interest in fashion from an early age stemmed into an Indian ethnic fusion blog called The Scarlet Window, which in her own words was conceived owing to an eager desire to revive our native styles, and fuse it with the new-age trends to create wearable, contemporary Indian looks. She is equally at ease, feeling beautiful in a simple cotton sari with a nice pair of jhumkas as she does in luxe ensembles, pulling it all off with her lithe frame, flawless skin, long tresses and an exceptional perception of fashion that renders her a much sought after showstopper for eminent fashion designers.

Malavika Mohanan bundled up critical acclaim after appearing in Majid Majidi’s drama film, Beyond the Clouds (2017). Having ventured into South Indian films, Malavika, a Malyali at heart, born and raised in Mumbai, she has experienced the best of both worlds. Here’s a closer look at her style. Malavika Mohanan’s Feisty Festive Pink Is Immensely Lust Worthy!

A pair of Bronte shorts in white paisley print teamed with a bustier blouse from We Are Kindred. Wavy hair, smudged eyes, nude glossy lips completed her look. Malavika Mohanan Channels a Sublime Charm in an Embroidered White Kurti With Silver Oxidized Jewellery!

On the professional front, Malavika will be seen in Tamil action-thriller, Master written and directed by Lokesh Kanagaraj featuring alongside actors Vijay and Vijay Sethupathi. The music for the film is composed by Anirudh Ravichander.

(The above story first appeared on Scoop Buddy on May 10, 2021 11:58 AM IST. For more news and updates on politics, world, sports, entertainment and lifestyle, log on to our website scoopbuddy.com).

Yo or Hell No? Kirti Kulhari in Deepika Nagpal for the Girl on the Train Promotions!