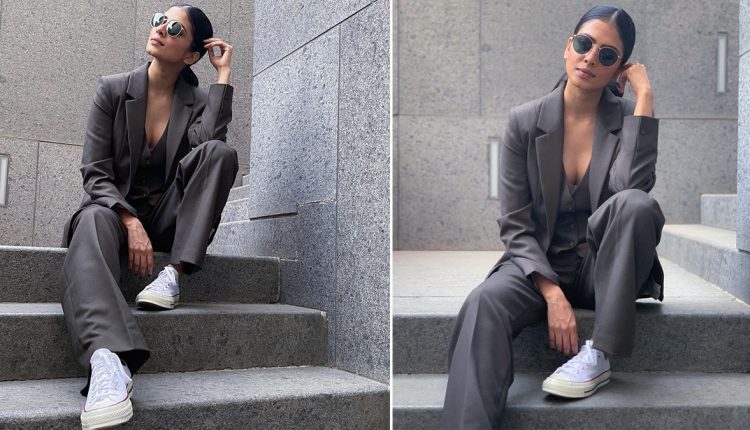 Malavika Mohanan’s Pantsuit Moment With Sneakers Is a Helluva Chic!

Pantsuits or powersuits, the wardrobe must-haves are back to being functional chic, courtesy the current Vice President of the United States. Taking some inspiration was our trailblazer, Malavika Mohanan. Pairing a grey pantsuit with white Converse sneakers and round sunnies, Malavika sleeked out her look with a no-nonsense hairdo and subtle makeup. With her lithe frame, flawless skin, long tresses and an exceptional perception of fashion, Malavika delights with her versatile arsenal. She is equally at ease and beautiful in a simple cotton sari with a nice pair of jhumkas as she is in luxe ensembles, Malavika is a certified style chameleon. Keeping it simple but significant may be her salient forte but she also experiments amply.

She amassed critical acclaim after appearing in Majid Majidi’s drama film, Beyond the Clouds in 2017. Here’s a closer look at her pantsuit vibe. Malavika Mohanan Channels a Sublime Charm in an Embroidered White Kurti With Silver Oxidized Jewellery!

The Tamil action-thriller, Master written and directed by Lokesh Kanagaraj features actors Vijay and Vijay Sethupathi. The music for the film is composed by Anirudh Ravichander.

(The above story first appeared on Scoop Buddy on May 10, 2021 10:08 PM IST. For more news and updates on politics, world, sports, entertainment and lifestyle, log on to our website scoopbuddy.com).

Hug ‘Close Friends and Family’, Visit Abroad, Pubs and Cinemas Reopen: England Eases COVID-19 Restrictions From May 17, Here What You Can Do in the UK From Next Week