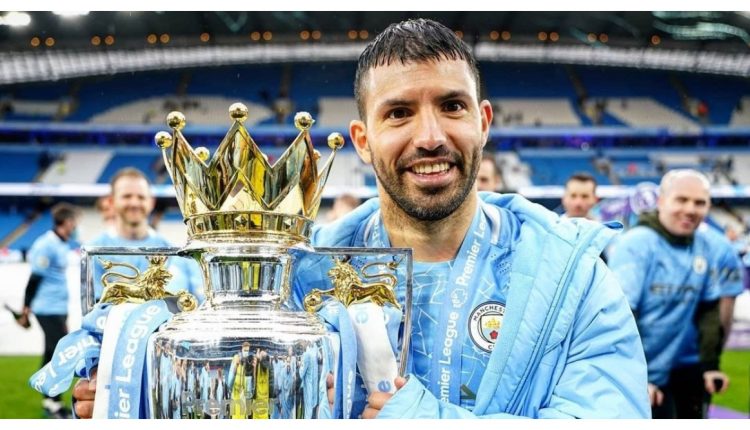 ‘Don’t cry because it’s over, smile because it happened…’–Manchester City couldn’t have had found a better line to bid goodbye to one of its’ club legends, Sergio Aguero. And the 32-year striker showed why he is regarded as one of Premier League’s greatest as he found the back of the net twice after coming off the bench, in City’s 5-0 demolition of Everton en route to their fifth Premier League title on Sunday. The striker now is reportedly set to join Barcelona, where he would play alongside friend and Argentina teammate Lionel Messi. Manchester City Star Sergio Aguero To Leave Club in Summer

On August 28, 2011, a young Aguero was roped by City for 38 million from Atletico Madrid. Ever since his first Premier League game against Swansea, the Argentine has demonstrated sheer pace, skill and most importantly, an energy to score more, which thus makes him such a prolific goalscorer and one of the best strikers to have ever played in the Premier League, alongside a list of other great names.

And after 10 years, he is leaving behind his own legacy in the Premier League. As a matter of fact, he is responsible for one of the most memorable and iconic goals when he netted the winner against Queenspark Rangers in 2012 to hand City their first Premier League title in 44 years. Well that was just the beginning. A decade later, he exits the Etihad as one of its’ most decorated and memorable players.

Aguero’s records speak for him. He has scored 258 goals for City across all competitions, since he joined the club in 2011. On Sunday, he bettered Wayne Rooney’s tally of 183 goals for a single club (Manchester United) when he scored a scintillating brace to mark his 184th strike for Manchester City–the most by any player for a single Premier League club. He is the fourth best striker and the best foreign import in Premier League history with 184 goals, with only Alan Shearer (260), Wayne Rooney (208) and Andrew Cole (187) ahead of him. Not to forget the Golden Boot, which he had won during the 2014/2015 season.

The Argentine has a total of 12 hattricks, most in the Premier League, surpassing Alan Shearer’s tally of 11. He has won the ‘Player of the Month’ award for a record seven times. The 32-year old also holds the distinction of scoring against 32 out of the 33 Premier League sides he has faced. Five Premier League titles, six League cup trophies and one FA cup–he has won it all in English football. Without an iota of doubt, he is one of the best ever performers to have graced the Premier League.

Sunday was his last dance with Manchester City–a club that he has led to be one of England’s and Europe’s potent forces. Aguero might or might not feature for City in the Champions League final against Chelsea but he leaves the club a legend and one whom in Pep Guardiola’s words, will never be replaced.

(The above story first appeared on Scoop Buddy on May 24, 2021 02:37 PM IST. For more news and updates on politics, world, sports, entertainment and lifestyle, log on to our website scoopbuddy.com).

Demi Lovato Says Complimenting Someone on Weight Loss Might Be ‘Harmful’