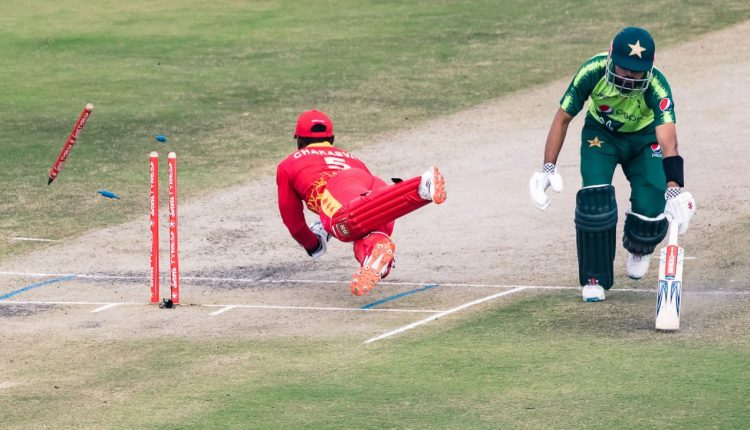 After their first T20I win against Pakistan, the hosts now chase their first-ever bilateral series win in the format

It was about time the chickens would come home to roost on Pakistan’s middle order, but the manner of that reckoning was so grave even those predicting it were taken aback. A first-ever T20I loss to Zimbabwe, and the fourth-lowest total defended against a Full Member saw Pakistan bowled out for 99 in a chase of 119, losing their last seven wickets for just 21 runs. The confidence shot it gives Zimbabwe cannot be overstated as, against all odds, they go into the third and final T20I with a real chance of springing upon Pakistan a chastening series defeat.

There is, of course, room for improvement for both sides, especially with the bat. Zimbabwe restricted Pakistan thanks to a combination of a near-flawless performance with the ball, in the field and the total capitulation of the visitors. While stand-in captain Brendan Taylor will want a repeat performance in that respect from his side, Pakistan are unlikely to be that listless two games in a row. To counter that, Zimbabwe could work on the way they paced their own innings with the bat, putting little pressure on Pakistan, almost content to canter along to a sub-120 total.

With Craig Ervine ruled out of the series and Sean Williams nursing a hand issue in for the last game, Zimbabwe lost plenty of experience, so the return of the latter might not be a surprise. Taylor did mention after the match that his side might have to approach the powerplay with a touch more positivity, setting the tempo for the remainder of the innings. The pitches here in Harare appear to have plenty in them for bowlers, with both captains agreeing totals around 140-150 were challenging. With Zimbabwe having felt they left runs out there, they go into the decider on equal terms.

Pakistan, meanwhile, appear to be on that precipice from which they could lurch either to brilliance or chaos, with no way of predicting which it will be. They were given a nudge towards the latter after the second T20I with Shoaib Malik taking to Twitter to lambast “unacquainted decision makers”. What should have been a series to try out new players and fine-tune certain aspects of their game for the T20 World Cup has instead thrown up a decider of extreme pressure, giving this series a higher profile than most would have accorded it a few days ago.

Wesley Madhevere was by far the brightest spark of Zimbabwe’s tour of Pakistan a few months ago, but he hasn’t quite lit up this series just yet, particularly with the bat. There have been glimpses of his ability in these two games, but justice to his talent is yet to be done. His dismissal in the previous game was especially disappointing when he attempted a low-percentage reverse sweep and gave away his wicket while Zimbabwe desperately needed him to bat deep. His contribution with the ball, though, has been surprisingly impactful, conceding just 27 runs in five overs and taking two wickets across the two games.

Mohammad Hafeez was believed to be a panacea of sorts for the middle order; unlike the rest, he was in excellent form in the lead up to Pakistan’s tours of South Africa and Zimbabwe. He missed South Africa’s T20I series in Pakistan because he was playing the T10 League in the UAE, where he excelled, and went on to distinguish himself with his performances in the PSL. However, that form has not turned into output at the international level in a beleaguered middle order, further amplifying Pakistan’s woes. He had a phenomenally successful 2020, barging his way back into Pakistan’s T20 World Cup plans, but if this barren run continues, he could find himself frozen out in double-quick time.

If Williams returns, he will add experience to the batting line-up, but it’s unlikely Zimbabwe will wish to make too many changes to the side that helped them win the second T20I.

Pakistan rested Shaheen Shah Afridi and Hasan Ali for the last two games, but with the series on the line, it would not be a surprise to see them make an appearance.

The weather is clear again, and with the boundaries as big as they are, a target around 150 should put the side batting first in a decent position. Both sides have fielded first upon winning the toss, but have ended up failing to chase down targets.

Danyal Rasool is a sub-editor at ESPNcricinfo. @Danny61000

When Fashion Takes Center Stage: A Look at the Stunningly Talented Tigerlily Hill