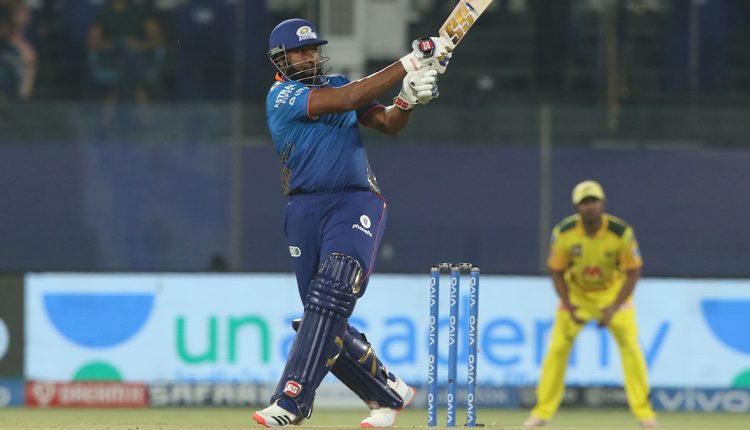 Mumbai Indians pulled off something near impossible against Chennai Super Kings in match 27 of the Indian Premier League (IPL) 2021 at the Arun Jaitley Stadium on May 01, 2021 (Saturday). Courtesy of a power-hitting master-class from Kieron Pollard – 87 off 34 – the record champions chased a score of 219 runs, their highest successful run chase in the history of the competition. MI vs CSK Highlights VIVO IPL 2021: Mumbai Indians Beat Chennai Super Kings by Four Wickets.

After being out to bat first, Chennai Super Kings lost a wicket early but bounced back quickly as a sensational partnership between Moeen Ali and Faf du Plessis gave them a foothold in the game and later a sensational cameo from Ambati Rayudu, helped the three-time champions set up their highest score against Mumbai Indians. IPL 2021 Points Table Updated.

However, it wants enough in the end for CSK as a sensational knock from Kieron Pollard saw Mumbai Indians chase one of the biggest scorers in IPL history. Quinton de Kock and Rohit Sharma also contributed with scores in the chase. Meanwhile, here are some stats from the MI vs CSK, IPL 2021 clash.

# This is MI’s highest chase in IPL history

# 138 MI vs CSK, is the most runs scored by a side in a successful IPL run-chase

# This is the second-highest successful chase in IPL

# 218, is the highest score by CSK against Mumbai Indians

# Jasprit Bumrah (1/56) bowled his most expensive spell in IPL

Mumbai Indians will now look to keep their winning run going when they take on Sunrisers Hyderabad in their next IPL 2021 fixture. Meanwhile, Chennai Super Kings, who had their five-game winning run ended, will be hoping to bounce back against Rajasthan Royals.

(The above story first appeared on Scoop Buddy on May 01, 2021 11:46 PM IST. For more news and updates on politics, world, sports, entertainment and lifestyle, log on to our website scoopbuddy.com).