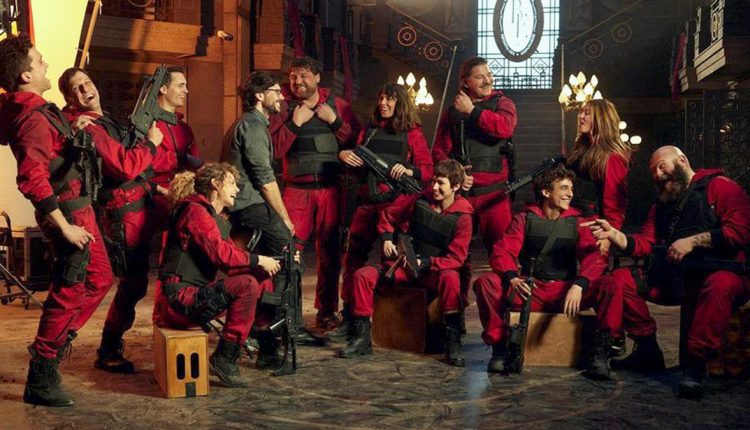 The insanely popular Netflix series ‘Money Heist’ (La Casa de Papel) has completed shooting its fifth season. The upcoming season of the Spanish crime drama, which had been under production for several months, officially wrapped up the shoot on Friday. Netflix shared a heartwarming click on its social media handles, which features the entire cast, in their iconic red jumpsuits, sharing a candid moment. The caption alongside the picture read, “What started as a heist, ended as a family. It’s a wrap on Part 5 of La Casa de Papel/Money Heist. Thank you to all the fans for being part of La Resistencia (the resistance)! We can’t wait to show you how this story ends.” Money Heist Season 5: Álvaro Morte and Itziar Ituño Post Emotional Goodbyes to the Series on Instagram!

While there is a lot of speculation about who will survive and who will be taken down by the cops in the fifth season, the photo is only making the viewers more curious. One can see nearly all the actors, including Alvaro Morte, Ursula Corbero, Itziar Ituno, Pedro Alonso, Miguel Herran, Jaime Lorente, Esther Acebo, Rodrigo de la Serna, Darko Peric, Hovik Keuchkerian, among others.The series’ actors have been posting about their final days on set on social media in recent weeks. These actors include Alvaro Morte (The Professor), Itziar Ituno (Lisbon) and Pedro Alonso (Berlin). Money Heist 5: Netflix Announces The Finale Season, Fans Lose Their Calm! (View Post).

‘Money Heist’ is Netflix’s most successful Spanish series to date, and was its top non-English-language foray until the French series ‘Lupin’ debuted in December, reported Variety. The series focuses on a group of misfit con artists and robbers who convene under the guidance of “the Professor” to rob major banks in Spain. The series originated on Spanish network Antena 3 to lukewarm ratings before Netflix breathed new life into the program, transforming it into the biggest show to ever emerge from the Spanish market. The streamer had in July last year given the go-ahead to the upcoming season of ‘Money Heist’. The fifth season will mark the end of the gang’s ongoing robbery at the Bank of Spain.

“We’ve spent almost a year thinking about how to break up the band,” said creator and showrunner Alex Pina at the time. Pina added, “How to put the Professor on the ropes. How to get into situations that are irreversible for many characters. The result is the fifth part of ‘La Casa de Papel.’ The war reaches its most extreme and savage levels, but it is also the most epic and exciting season.” Created by Alex Pina and produced by Vancouver Media, the Spanish series became an instant hit on Netflix when it released.

‘Mucormycosis Is Caused Due to Misuse of Steroids’, Says AIIMS Director Randeep Guleria