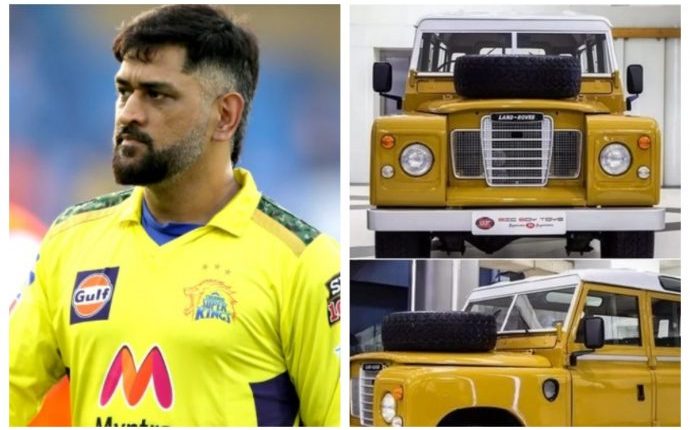 MS Dhoni is known for his love for cars and bikes. The former Indian captain’s car and bike collection is quite impressive and probably. Now, MS Dhoni has added one more study vehicle to his line of cars. The CSK captain has bought the 1971 Land Rover Series 3 Station Wagon from an online auction that was conducted by Big Boy Toyz.  The company mentioned that the auction witnessed the participation of several celebrities from India. The car is yellow in colour and was among the most popular Land Rover Series cars ever built. The price of this vehicle is unknown as both particles have not spoken up about the same. MS Dhoni is Trending! Twitterati Reacts After Commentator Quotes MSD’s Lines During ENG vs NZ, T20 World Cup 2021 Semi-Final.

The auction included various other options that went under the hammer. A total of 19 cars went under the hammer that included  Rolls Royces, Cadillacs, Buicks, Chevrolets, Austins, Mercedes. The auction for Beetle started at Re 1 and went up to Rs 25 lakh. Talking the vintage car bought by the former Indian skipper, it was manufactured between 1971 and 1985 and the company sold built more than 440,000 units of the Series 3 Station Wagon. Back then. there were fewer engine options available including a 2.3-litre four-cylinder petrol engine and a 3.5-litre V8.

(The above story first appeared on Scoop Buddy on Jan 19, 2022 05:23 PM IST. For more news and updates on politics, world, sports, entertainment and lifestyle, log on to our website scoopbuddy.com).