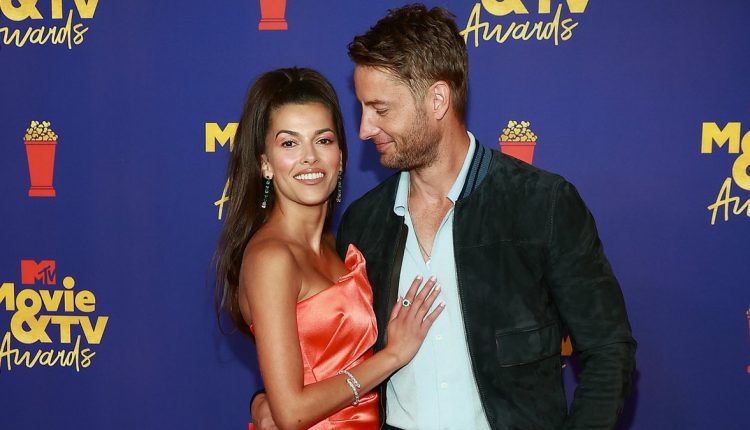 American actor Justin Hartley and his girlfriend Sofia Pernas made their romance Red Carpet official on Sunday night (local time) during the 2021 MTV Movie & TV Awards, hosted by Leslie Jones. According to People magazine, the 44-year-old ‘This Is Us’ star and Pernas made their first red carpet appearance as a couple at the mega event. Hartley wore a light blue shirt, dark blue pants and a suede jacket for the event, while the ‘Blood & Treasure’ star opted for a stunning coral dress. MTV Movie And TV Awards 2021: Anthony Mackie Goes ‘Tom Holland I Am On Your A**’ During His Acceptance Speech (Watch Video).

On the carpet, both could be seen wearing rings on their wedding fingers as they posed together. As per People magazine, they first sparked speculation about their relationship status when they were photographed wearing rings earlier this month. A source confirmed to People magazine last June that Hartley and Pernas had been dating “for several weeks.” Later that year, the actors made their relationship Instagram official on New Year’s Eve. MTV Movie And TV Awards 2021: Chadwick Boseman, Scarlett Johansson, Anthony Mackie Get Honoured; Check Out The Complete Winners’ List.

“Sayonara 2020, it’s been real. Happy New Year from our quarantine den to yours,” Pernas wrote on Instagram at the time, sharing a selfie of the couple. On his Instagram page, Hartley shared a black-and-white photo of the duo smiling and dressed up for the occasion. “Last minutes of 2020 here in LA. Bring on 2021! Happy New Year!” he wrote. Hartley was previously married to ‘Selling Sunset’ star Chrishell Stause for two years before he filed for divorce in November 2019. Their divorce was finalised earlier this year. Before Stause, Hartley was married to his ‘Passions’ costar Lindsay Koman from 2004 to 2012. They share a 16-year-old daughter Isabella.