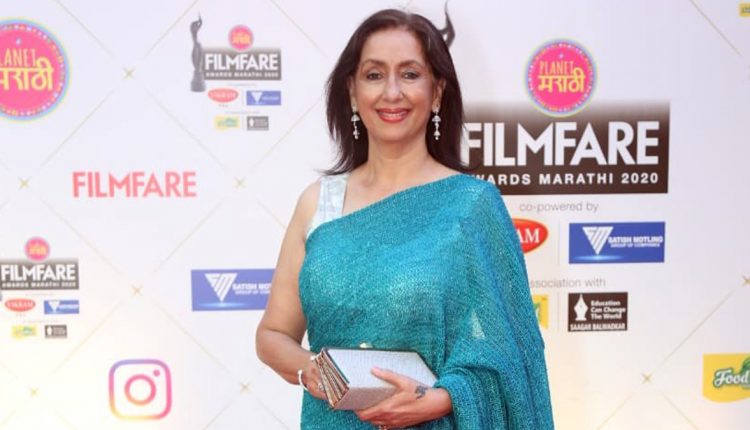 Neena Kulkarni: I Have Been Fortunate Enough to Get Interesting Work

Veteran actor Neena Kulkarni says she feels blessed that her filmography comprises characters that have stood the test of time. The 65-year-old actor has been part of the entertainment industry for four decades with a great body of work spread across mediums, including theatre, TV, cinema and OTT platform, both in Marathi and Hindi. Some of her noteworthy performances include theatre presentations “Mahasagar” and “Dhyani Mani”, TV shows “Ados Pados”, “Yeh Hai Mohabbatein”, National Award-winning Marathi film “Shevri”, Priyadarshan’s comedy “Hungama” and veteran British actor Judi Dench-led “The Best Exotic Marigold Hotel”. Photo-Prem Trailer: Neena Kulkarni’s Identity Crisis As She Searches for a Perfect Picture Looks Amusing (Watch Video).

“The roles that I have played have been timeless. There may be some quintessential characters, but otherwise I have been fortunate enough to get interesting work. I am glad I have played timeless parts,” Kulkarni told PTI in a Zoom interview. On OTT she has acted in the Amazon Prime Video series “Breathe” and Marathi film “Photo-Prem” that released on May 7 on the same platform. It is the strength of a character — be it of a mother or wife — Kulkarni said, that drives her to select a project. “After all these years, I look for characters that are strong, unique in a way. In case of ‘Photo Prem’ I felt the journey was very interesting and hence said yes to it,” she added. Neena Kulkarni Says, ‘Marathi Films Are Always Ahead of the Time’.

Directed and co-written by Aditya Rathi and Gayatri Patil, the movie follows the journey of a housewife named Maee (Kulkarni) who tries to overcome the fear of camera and click a perfect picture so that her family remembers her post her death. The movie deals with the theme of death and afterlife but with a dash of humour. Co-director Patil said a chance encounter with a woman in her 50s, who arrived all decked up at a photo studio to click her pictures, and the experience of her own grandmother having an old picture led to the germ of the idea for the film.

“Whenever you look at photos of grandparents they have white hair, no teeth, and wrinkles. There is so much more to them than just looking like this. I would feel so sad and bad about this. “My grandmother too in her photo had wrinkles and was looking old. I felt she should have taken more pictures when she was beautiful and full of energy. So these two thoughts combined and the story came about,” she said. Rathi added that the challenge was to deal with a subject like death and yet maintain an easy vibe.

“When we started observing such photos, they seemed dangerous. Also, when someone dies the exercise begins with ‘where is the photo?’. You start calling relatives, get group photos, you edit it and get it printed. We found fun in this journey,” he said, adding, when he lost his father the family did have a photo that brought out his personality. For Kulkarni to explore this journey of a typical housewife, who is taken for granted and suddenly becomes excited about getting her own pictures, was pure joy.

“Because she is observant she saw how a family was looking for photos after a death in the family. I found her world interesting,” the actor said. Produced by Everest Entertainment, the film also features Amita Khopkar of “Lai Bhaari” fame and Sameer Dharamadhikari, best known for his work on the TV show “Chakravartin Ashoka Samrat” and Marathi movie “Nirop”, in pivotal roles.