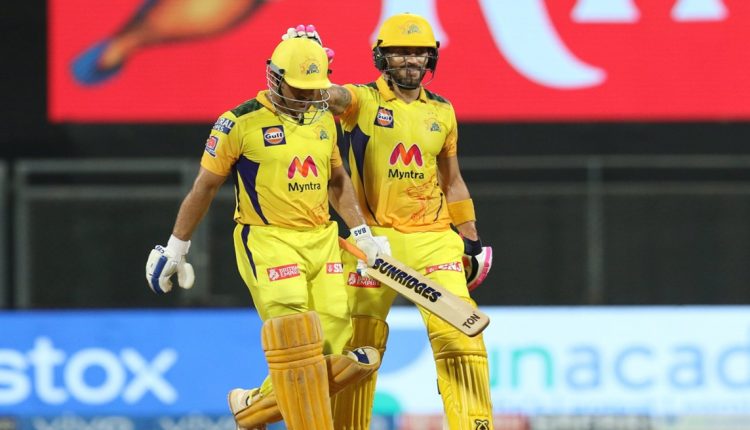 Faf du Plessis created ripples in the game IPL 2021 game against the Kolkata Knight Riders. He scored an unbeaten knock of 95 runs and led the team to a total of 220 runs at the Wankhede Stadium in Mumbai. Needless to say that the netizens were quite impressed with the unbeaten knock by the South African. Netizens posted happy tweets on social media and hailed the CSK batsman for his prolific knock. Before getting on to the tweets, let’s have a quick look at how the match panned out for both sides. CSK Live Score Updates of VIVO IPL 2021.

So after winning the toss, Eoin Morgan elected to bowl first. Harbhajan Singh missed out on playing XI and KKR brought in Kamlesh Nagarkoti. Post this, Ruturaj Gaikwad and Faf du Plessis were blazing guns. AFter Gaikwad Moeen Ali and MS Dhoni contributed a bit. Ravindra Jadeja and Faf du Plessis remained till the end of the innings. Faf during the course of his innings slammed nine boundaries and four maximums. Obviously, he was praised for his prolific knock.

Now, let’s have a look at the tweets below:

Faf du Plessis patting MS Dhoni when he got out has to be best thing on internet.❤#CSKvsKKR pic.twitter.com/ZyNC4E9YHV

CSK finishes with 220/3. An excellent innings from Faf Du Plessis – 95 in 60 balls. A perfect finishing from Faf, the way he played today deserved the century. Ruturaj Gaikwad also played well for his 64, MS Dhoni smashed a good cameo of 17. pic.twitter.com/szovJc3VYi

Faf du Plessis, Ravindra Jadeja and Suresh Raina together on the field shouldn’t be legal.

Absolute Class, What a Player Faf Du Plessis is. Personally always rate him very high as he has a great technique. Never get bored when he is playing. #CSKvsKKR pic.twitter.com/SZ2vzRC1Dc

Talking about the Kolkata Knight Riders, they are into deep trouble as they have lost five wickets. Deepak Chahar was the man who scalped four wickets for the team.

(The above story first appeared on Scoop Buddy on Apr 21, 2021 10:15 PM IST. For more news and updates on politics, world, sports, entertainment and lifestyle, log on to our website scoopbuddy.com).

EC on TMC’s Request Amid Covid