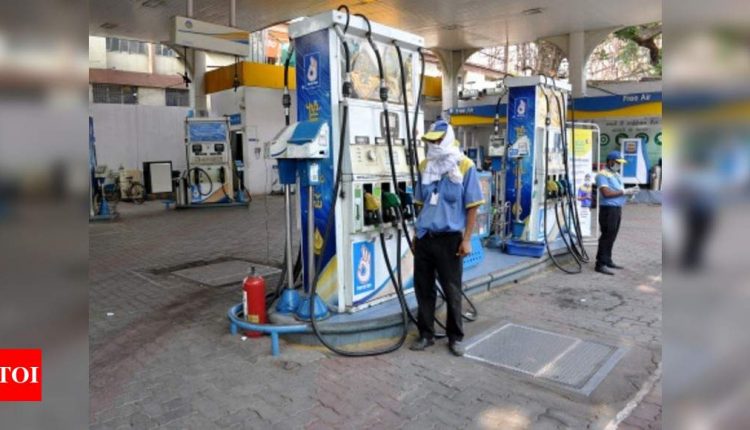 By admin On Apr 19, 2021
0
Share
NEW DELHI: Rising coronavirus infections, prompting a slew of local lockdowns across the country, are threatening to slow recovery in fuel demand as stronger containment measures will hit economic activity, officials said on Monday.
After Maharashtra, Delhi and Rajasthan have imposed limited period lockdowns, which will impact travel and business activity. Other states have implemented curfews at different times of the day and of varying durations.
“The first casualty of such measures is mobility and a resultant fuel consumption,” a senior official at a public sector oil marketing company said.
A record 2,73,810 coronavirus infections on Monday pushed overall cases to more than 1.5 crore, making India the second-worst affected nation after the US, which has reported more than 3.1 crore infections. India’s deaths from Covid-19 rose by a record 1,619 to nearly 1.8 lakh.
Diesel, petrol, jet fuel and LPG demand all declined in the first half of April from a month earlier and the trend is likely to worsen in the second half with more states imposing restrictions.
India’s most used fuel, diesel consumption slipped 3 per cent over the previous month while petrol sales were down 5 per cent, the official said.
LPG demand, which had bucked the trend in the wider fuel market and increased during Covid, fell by 6.4 per cent to 1.03 million tonnes in the first half of this month. Jet fuel demand was down by 8 per cent.
“We are seeing 20-25 per cent fall in CNG sales this month,” another official said. “New vehicles are market creators and the lockdowns will virtually stop all new vehicle sales.”
These trends indicate fuel consumption, which had seen a fragile recovery in the latter part of 2020-21 fiscal, dropping again, officials said.
India’s fuel demand contracted 9.1 per cent in the financial year ended March 31, the first in more than two decades, as a stringent lockdown imposed to curb the spread of the pandemic pummelled economic activity.
For 2021-22 fiscal (April 2021 to March 22), the oil ministry had projected a near 10 per cent price in fuel consumption. This of course before the resurgence of Covid inflections.
“If the current wave of infections continues for another month, we will have to revise the projections,” an official said.
Maharashtra, the worst affected state, has announced a lockdown until May 1 with exceptions only for essential services, exporters and transportation. Delhi too has announced a six-day lockdown and partial lockdowns have been announced in states like Uttar Pradesh and Rajasthan.
Industries in Haryana, an auto and services hub, are operating at a lower capacity because migrant workers have left for their hometowns.
India consumed 194.63 million tonnes of petroleum products in 2020-21 as compared with 214.12 million tonnes demand in the previous year, according to oil ministry’s Petroleum Planning and Analysis Cell (PPAC).
This the first time that the fuel consumption has contracted since 1998-99, the most historical year for which government data is available.
The demand contraction was led by diesel, the most consumed fuel in the country. Diesel consumption fell 12 per cent to 72.72 million tonnes while petrol demand shrank 6.7 per cent to 27.95 million tonnes.
The government imposed a nationwide lockdown at the end-March of last year, shutting down factories and businesses, halting most road transport, cancelling flights and stopping trains. The lockdown was lifted in stages beginning June.
The GDP is estimated to have contracted by 7-8 per cent in 2020-21 after economic activity showed signs of recovery in the last quarter of 2020.
However, a new wave of Covid-19 infections despite a broadening vaccination rollout, with renewed lockdowns implemented in some states, is threatening to hit the nascent recovery.
0
Share FacebookTwitterGoogle+ReddItWhatsAppPinterestEmail

Lamborghini in fast lane, delivers 2,422 supercars between January and March