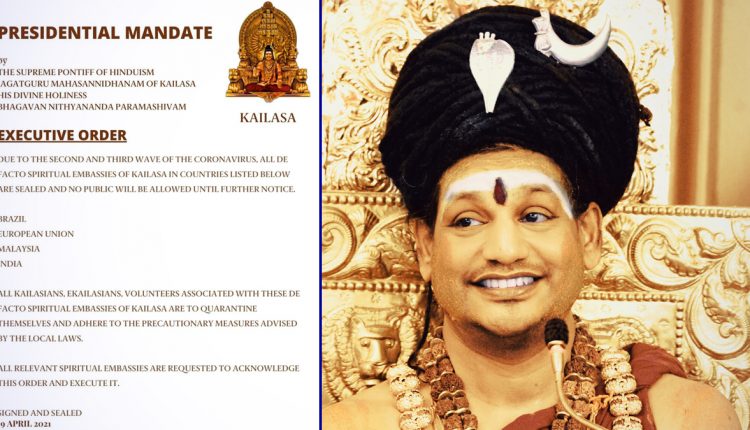 New Delhi, April 22: Amid the surge in coronavirus cases in the country, Nithyananda, the fugitive self styled godman who founded his own island nation under the name ‘Kailasa’ has banned the entry of ‘devotees’ from India among other countries. A recent tweet by ‘KAILASA’S SPH JGM HDH Nithyananda Paramashivam’ has restricted the entry of travellers from India, Brazil, European Union and Malaysia to his island nation in wake of spike in COVID-19 cases. Fugitive Godman Nithyananda Wants 1 Lakh People to Settle in His ‘Country’ Kailasa after Announcing E-Visa, Passport and Flights.

Through his official Twitter handle, Nithyananda shared a ‘Presidential Mandate’ ordering that no travellers from the above mentioned countries will be allowed to enter Kailasa. ” KAILASA’s #PresidentialMandate Executive order directly from the #SPH for all the embassies of #KAILASA across the globe,” the tweet read. Swami Nithyananda Rolls Out E-Visa and Passport For Kailasa, His Own Hindu Island Nation; Here’s How to Apply in Case You Want a ‘Trip’! (Watch Videos).

The Presidential Mandate also states, “All Kailasians, Ekailasians, volunteers associated with these de facto embassies of Kailasa are to quarantine themselves and adhere to the precautionary measures advised by the local laws.” Adding that all spiritual embassies are requested to acknowledge this order and execute it.

Nithyananda formed his own nation in 2019, which is reportedly located off the coast of Ecuador, and has been absconding after being accused in a sexual assault case. Time and again the fugitive godman has asked the United Nation to provide a separate country status to Kailasa. The island nation has its own passport and currency called the ‘Kailashian Dollar’ as well.

(The above story first appeared on Scoop Buddy on Apr 22, 2021 06:41 PM IST. For more news and updates on politics, world, sports, entertainment and lifestyle, log on to our website scoopbuddy.com).