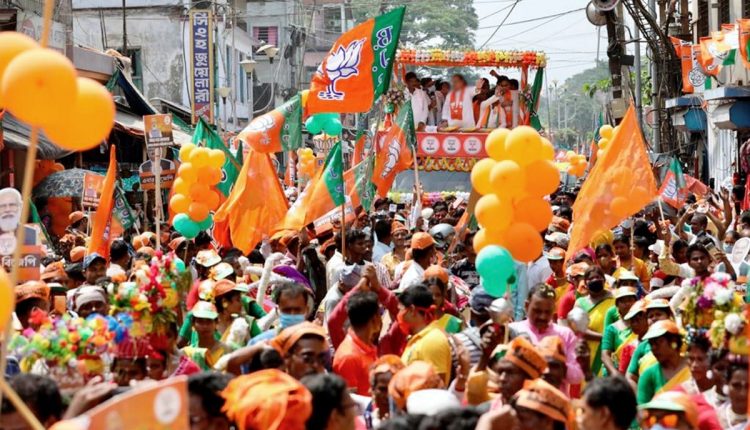 Amid rising cases of Covid-19 across the country, the Bharatiya Janata Party (BJP) on Monday announced that it will not hold any big rally or road show in poll-bound West Bengal with immediate effect. The decision by the saffron party comes days before of the end of campaigning for the 8th and final phase of state Assembly elections.

BJP national president JP Nadda said that not more than 500 people will be present in any public meeting or rally addressed by Prime Minister Narendra Modi or any other party leader in the state. The saffron party also decided to distribute over 6 crore masks and hand sanitisers across the state, in view of the pandemic.

Apart from PM Modi, other senior party leaders like Union home minister Amit Shah and JP Nadda will campaign in Bengal over the next few day. Senior cabinet ministers including Ravi Shankar Prasad, Smriti Irani and Gajendra Shekhawat will also be on campaign trail. Constant push has been put on following Covid-19 protocols at such gatherings.

The key decision by the BJP comes days after facing severe criticism for their continued campaign in Bengal despite the raging pandemic. Earlier, Congress leader Rahul Gandhi had announced cancellation of all campaign rallies held by his party in the state.

Bengal Chief Minister and Trinamool Congress (TMC) supremo Mamata Banerjee also announced that she will not hold any big rally in the state in the wake of the Covid-19 crisis, apart from the one rally she will hold in Kolkata on the April 26.

In a meeting with all political parties across the state on Friday, April 16, Bengal Chief Election Officer (CEO) declared a number of stern measures in line to follow strict Covid-19 protocols during poll campaigning in the state. The silence period ahead of polling for the 6th, 7th and 8th phase of elections was increased from 48 hours to 72 hours, and the timing to campaign was also restricted.

According to the new measures by the election commission, no campaign will take place between 7 pm and 10 am. An onus was put on political parties to ensure that social distancing was practised during their campaigning and it was their responsibility to ensure distribution of masks and hand sanitizers at the rallies.

The administration was also entrusted with the responsibility to make sure Covid-19 protocols were not violated during election campaigning.