The Omicron coronavirus variant kicked oil prices lower late last week and has sapped refining margins, but with crude futures rallying on Monday, the impact could be limited.

Governments worldwide have imposed curbs on travellers to try limit the spread of Omicron, first detected in southern Africa, as scientists race to determine the level of risk.

Oil prices plunged more than 10% on Friday – their largest daily drop since April 2020 – but recovered some of those losses on Monday, standing up nearly 5% on the day. Analysts said the Friday sell-off had been excessive. [O/R]

Refining margins fell further, increasing the impact of new coronavirus curbs that had already been rolled out in Europe.

Jet fuel cargo margins were assessed at about $7.7 a barrel, near a two-and-a-half month low.

But it said it expected demand recovery from the pandemic to continue even though consumption forecasts had weakened before last week’s sell-off.

The volatility raises the stakes for a meeting by the Organization of the Petroleum Exporting Countries and allies set to take place this week when the producer nations will weigh their concerns about demand with pressure from consumer nations facing inflationary pressure from still high oil prices.

Singapore’s complex margins, a barometer for Asian refiners’ profitability, stood at $2.36 a barrel on Monday after falling to the lowest since June 30, Refinitiv data showed.

An official at a major South Korean refiner who asked not to be named said he had seen “drastic drops in refining margins” because of the Omicron variant. 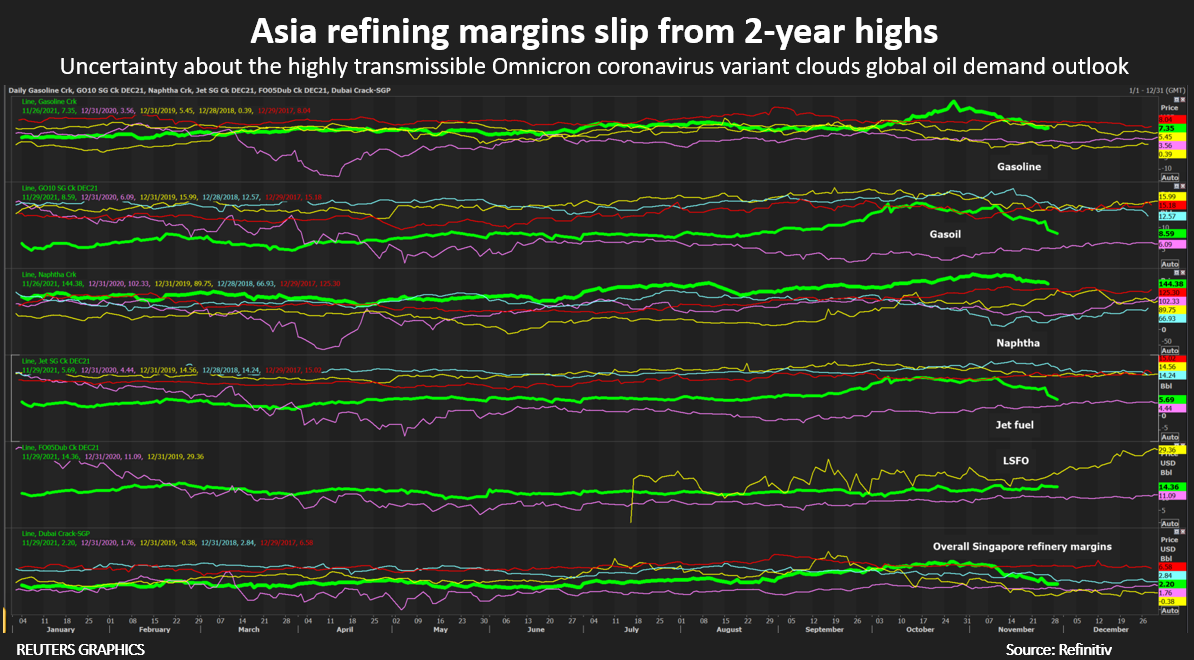 Travel curbs could especially hit the recovery of jet fuel prices, which reached a 2021 peak of $13.50 a barrel in mid-October, according to Reuters calculations – broadly in line with their levels in October 2019.

Air travel, however, is a relatively small part of overall oil demand.

Demand from power generators, which have shifted to using oil as natural gas supplies has shrunk, is also expected to support the overall market.

China, the world’s biggest fuel consumer, could also continue to provide support it its rigorous border controls manage to limit the spread of Omicron, said an analyst from a Beijing-based consultancy, who declined to be named due to company policy.