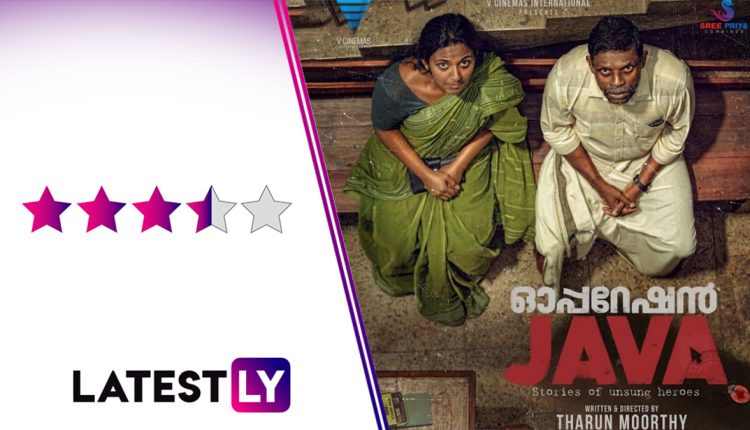 Operation Java Movie Review: Last week, we had reviewed Martin Prakattu’s brilliant Nayattu that showed the apathy of the system towards the police department. Now there is Operation Java, written and directed by Tharun Moorthy, that shows the department in a more positive light, only to make us realise that the messaging is still the same. But before the evident cynicism, Operation Java is, for most of its portions, an extremely arresting thriller, fashioning itself as a docudrama. Nayattu Movie Review: Kunchacko Boban, Joju George and Nimisha Sajayan Star in One of the Best Cop Thrillers in Recent Times, if Not the BEST!

The film is about the workings of a police cyber cell in Kochi, focusing on two youngsters Anthony (Balu Varghese) and Vinaya Dasan (Lukman Avaran), who are B-Tech graduates but with no permanent jobs. Thanks to their technical aptitude and intelligence, they are able to help the IT department in some crucial cases, as they start off as outsiders who discovers a new angle in a case, to being hired as interns to help in other investigations. In between, we also seen glimpses of the lives of these youngsters, especially Anthony who is struggling to keep his love life afloat.

If you are someone who follows regular news, you must have read about some of the events that are featured in the film. The first 40 minutes of Operation Java are absolutely kickass! Referring to the infamous leak of the Censor Board copy of Alphonse Puthran’s 2015 film Premam (Operation Java is set in that same year), we get to see how the IT cell team manages to catch the real culprit who originally uploaded the copy, thanks to the help of Anthony and Vinaya Dasan. The movie also doesn’t refrain from taking some real-life big names that come out during the investigations.

Of course, using Premam‘s controversy as its rocking opening act gives a nice meta twist to the film, as every Mallu fan knows how the Nivin Pauly-starrer made ‘Java’ a household word. Java valare simple alle?

Not so simple is the workings of these officers as they get to every minute detail to catch the real culprits. From attacking movie piracy, to exposing fake overseas recruitment scams, to even helping in a murder investigation, the meticulous manner in which Tharun leads our protagonists into their case-workings is what makes Operation Java a success.

Jakes Bejoy’s thumping score that gives the feel of an adventure saga to the movie, an excellent sound design (Vishnu Govind, Sree Sankar) and Faiz Siddik’s tracking shots do fantastic work of keeping your attention stick to what’s happening on the screen. Considering we just recently witnessed glorification of a cop indulging in extra-judicial killings, Operation Java‘s attempt to keep its heroes grounded and less showy keeps the thrill factor all the more alive.

Some breather arrives when we get into the personal lives of the two young men. While they are harmless and make Operation Java look less of a docudrama and more of a movie while etching out the main characters, the subplots do stretch the movie. Another little issue I have is with the representation of female characters. They are either victims or theppukaaris. The only lady in the team is more of a bystander than anything else. Krishnankutty Pani Thudangi Movie Review: Saniya Iyappan, Vishnu Unnikrishnan’s Gripping Mystery-Thriller Is Enhanced by Its Spooky Sound Design.

The performances are all good. I really appreciate that the makers chose not to use stars but just known faces in the main cast, which makes Operation Java walk that enticing line of being mainstream and being realistic. Balu Varghese and Lukman do well in the lead roles. while Binu Pappu and Irshad stand out with their likeable performances. Prashanth Alexander is convincing as the prejudiced officer, though his character felt more of a cliche by the end. Shine Tom Chacko, Mathew Thomas, the late P Balachandran, Johnny Anthony, leave a mark in their limited screentime. Wolf Movie Review: Samyuktha Menon and Arjun Ashokan Can’t Save This Confused Thriller.

– A Taut Thriller With Good Performances and Technical Proficiency

– Could Have Been Tighter

Operation Java is just another feather in Malayalam Cinema’s increasing repertoire of good cinema these days. Highly engaging in its writing and treatment and brilliantly acted, the movie is a crafty thriller based on the workings of Kerala’s efficient Cyber Cell department, while also paying tribute to the temporary employees engaged in government service. That too, without being a suck up. Operation Java, released in theatres on February 12, is streaming now on Zee5.

(The above story first appeared on Scoop Buddy on May 17, 2021 07:55 PM IST. For more news and updates on politics, world, sports, entertainment and lifestyle, log on to our website scoopbuddy.com).

Meet Elizabeth Houston, Taking Over The World of Entrepreneurship as a True Blue Professional