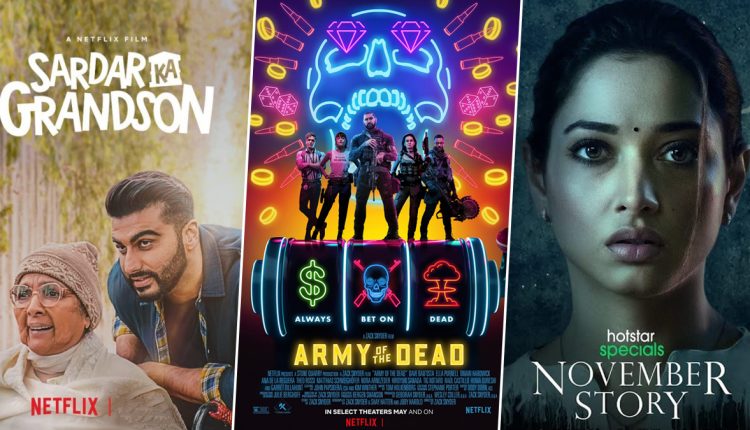 We are inching towards the third week of May 2021, and there are many exciting series and movies releasing on OTT platforms like Netflix, Disney+ Hotstar, Amazon Prime Video and HBO Max. Talking about the biggest release of the week, it would be Sardar Ka Grandson, which is all set to premiere on Netflix on May 18. Helmed by Kaashvi Nair, the film is about a loving US-return grandson who embarks on a complicated and humorous  journey to fulfil his ageing grandmother’s last wish of visiting Lahore. The romantic comedy-drama features Arjun Kapoor, Neena Gupta, Rakul Preet Singh, John Abraham, Aditi Rao Hydari and Soni Razdan among others. Sardar Ka Grandson Trailer: Arjun Kapoor, Rakul Preet and Neena Gupta Star in Netflix’s Heartwarming Flick, Don’t Miss John Abraham’s Cameo! (Watch Video).

Another big release of the week would be Army of the Dead, which is all set to stream on Netflix from May 21. Directed by Zack Snyder, the zombie-action thriller follows a storyline about a group of soldiers who plan a casino heist and ultimate gamble amid a zombie outbreak in Las Vegas. It stars Dave Bautista, Ella Purnell, Huma Qureshi, Omari Hardwick, Theo Rossi and others. Another interesting release of the week would be November Story, which will premiere on Disney+ Hotstar from May 20. The crime-thriller series directed by Ram Subramanian features Tamannaah Bhatia, G.M. Kumar, Pasupathy, Vivek Prasanna and Aruldass in lead roles. There are few Gujarati and Telugu series and films too that are lined up to release on Oho Gujarati and Aha Video, and you might not want to miss them also. The list includes Gujarati series Kadak Meethi and Telugu film Play Back. Army of the Dead Trailer Out! Zack Snyder’s Zombie Film Starring Dave Bautista and Huma Qureshi Makes Undead Look Awesomely Terrifying! (Watch Video).

So which series/films are you most excited about? Share your thoughts in the comments section below. Stay tuned to know about every upcoming OTT releases of the week!

(The above story first appeared on Scoop Buddy on May 17, 2021 02:06 PM IST. For more news and updates on politics, world, sports, entertainment and lifestyle, log on to our website scoopbuddy.com).

Realme 9 Pro+ teased by company ahead of India launch, specs and renders leak…