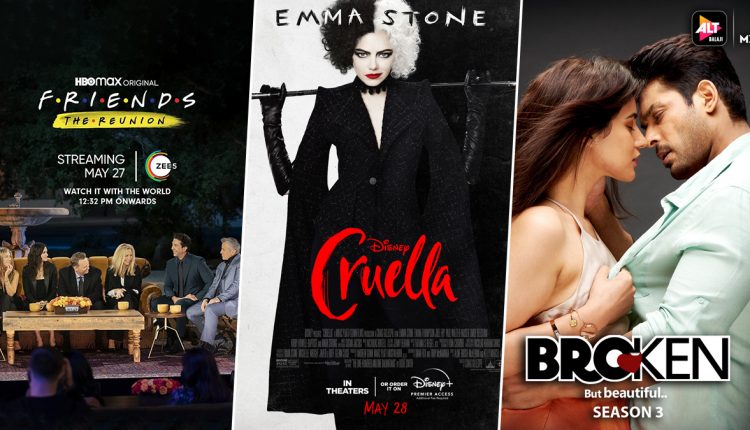 We look for exciting content on the OTT platforms every week, so that we can chill and binge-watch what we like. In the last week of May 2021, there are many intriguing series and movies releasing on Netflix, Disney+ Hotstar, ZEE5 and ALTBalaji. Talking about the biggest release of the week, it would be Friends Reunion, which is all set to stream in India on ZEE5 on May 27. Directed by Ben Winston, the unscripted show brings back Rachel, Ross, Monica, Chandler, Phoebe and Joey, to their apartment in New York and also at Central Perk. All the six original cast members of Friends – Jennifer Aniston, Courteney Cox, Lisa Kudrow, Matt LeBlanc, Matthew Perry, and David Schwimmer are coming back for the long-awaited event. Friends Reunion: Cast, Special Cameos, How to Stream Online – All You Need To Know About The Special Episode Arriving on ZEE5 and HBO Max.

Another big release of the week would be Cruella, which is all set to premiere on Disney+ Hotstar on May 28. Helmed by Craig Gillespie, the crime comedy-drama is based on the fictional character Cruella de Vil, who was proposed in Dodie Smith’s 1956 novel The Hundred and One Dalmatians, also Disney’s animated film One Hundred and One Dalmatians (1961). The live-action Disney movie stars Emma Stone, Emma Thompson, Joel Fry, Emily Beecham, Paul Walter Hauser and others. Another interesting release of the week would be Broken But Beautiful Season 3, which will stream on ALTBalaji and MX Player from May 29. The romantic web series, created by Ekta Kapoor stars Sidharth Shukla and Sonia Rathee in key roles. Else, Telugu film Ek Mini Katha and Tamil film Malaysia to Amnesia, are also lined up to release on Amazon Prime Video and ZEE5 respectively, and you might not want to miss them. Cruella: Before Emma Stone’s Disney Movie Arrives, 5 Spinoff ‘Origin’ Movies We Enjoyed in the Past (Scoop Buddy Exclusive).

So which series/films are you most excited about? Share your thoughts in the comments section below. Stay tuned to know about every upcoming OTT releases of the week!

(The above story first appeared on Scoop Buddy on May 25, 2021 11:12 AM IST. For more news and updates on politics, world, sports, entertainment and lifestyle, log on to our website scoopbuddy.com).