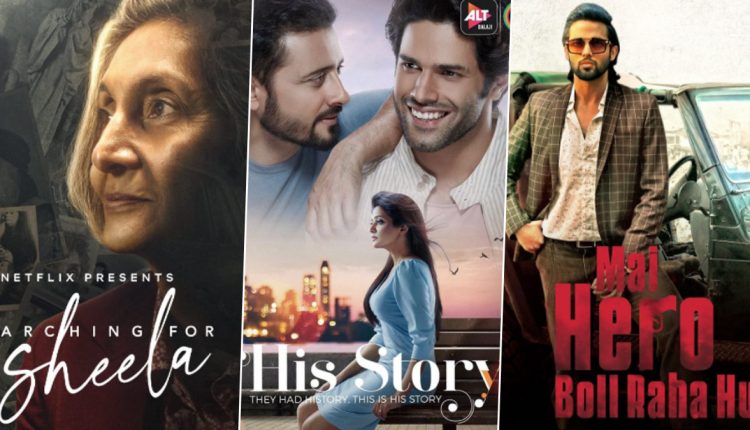 Coronavirus cases are rising all over the world and several states have already declared lockdown. It is more advisable to stay at home and if you are wondering how to pass time being at home, here’s the solution for you. In the fourth week of April 2021, there are many interesting series and movies releasing on OTT platforms like ALTBalaji, Netflix, ZEE5 and HBO Max. Talking about the biggest release of the week, it would be Searching for Sheela, which is all set to premiere on Netflix on April 22. Produced by Karan Johar, Apoorva Mehta and Somen Mishra, directed by Shakun Batra. The docu-film explores Ma Anand Sheela or Sheela Birnstiel’s journey, returning to India after 34 years and sheds light on her life over the last four decades. Searching For Sheela Trailer: Netflix’s Documentary on Ma Anand Sheela Looks Like a Perfect Sequel to Wild Wild Country.

Another big release of the week would be His Storyy, which is set to premiere on ZEE5 and ALTBalaji on April 25. Produced by Ekta Kapoor, Shobha Kapoor and Tanveer Bookwala, directed by Suparn S Varma. The urban-relationship drama is a story of a happily married couple, whose relationship suddenly after 20 years falls apart for a hidden truth. It stars Satyadeep Mishra, Priya Mani Raj and Mrinal Dutt in lead roles. Talking about another big release it would be Mai Hero Boll Raha Hu, which will stream on ZEE5 and ALTBalaji on April 20. The action-thriller stars Parth Samthaan, Arslan Goni, Danish Husain, and Patralekhaa Paul in the cast. There are few international films too that are lined up to release on Netflix, and you might not want to miss them also. The list includes Spanish movie Tell Me When and Japanese movie Perfume Imaginary Museum. His Storyy Trailer: Satyadeep Misra’s Struggle With His Sexuality Is All About Love, Infidelity and Acceptance (Watch Video).

So which series/films are you most excited about? Share your thoughts in the comments section below.

(The above story first appeared on Scoop Buddy on Apr 20, 2021 03:37 PM IST. For more news and updates on politics, world, sports, entertainment and lifestyle, log on to our website scoopbuddy.com).

Double Mask Means Double Protection Like the N95 Mask? From Benefits to Dos and Don’ts, Expert Reveals How to Cover Your Face to Protect Yourself Amid COVID-19 Pandemic