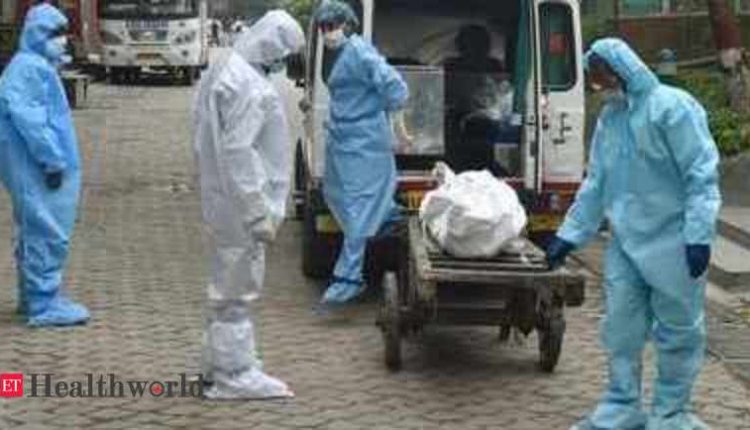 Mumbai: Maharashtra reported a surge of over 35% in fatalities on Friday and added its highest ever death toll of 773 Covid deaths. The state had reported 568 deaths on Thursday.

Mumbai contributed to less than 10% of the total fatalities in the state. While 72 deaths were reported from Mumbai, Mumbai Metropolitan Region (excluding Mumbai) reported 108. Daily detections in the rest of MMR were also higher than Mumbai on Friday. While Mumbai added 7,199 cases, the MMR region, which is spread across three districts and eight corporations, added 9,769 cases.

At the state level, Nagpur district reported more cases (7,970) than Mumbai, besides 58 deaths. However, the update from the district reported 82 deaths. So far this month, the state has added over 8,300 deaths and if the fatalities continue to surge at the given rate, it may surpass the 11,900 deaths added in September 2020, known to be the worst month of the Covid-19 pandemic.

Officials said the sharp rise in deaths is due to reconciliation of data. Of the total fatalities, 360 have occurred in the last 48 hours, 224 are from last week and the remaining 189 are from the period before last week. Meanwhile, Maharashtra reported a slight dip in daily detections and added 66,836 cases taking the total caseload to 41.6 lakh and the death toll to 63,252. Mumbai’s tally touched 6.1 lakh and the toll rose to 12,655. The case tally in the rest of MMR was 6.7 lakh and 9,709 deaths.

Dr Shashank Joshi, a member of the state Covid taskforce, has said cases have plateaued for Mumbai and the mortality seen is from the critical cases that got hospitalised two weeks ago. Of the 72 deaths, 22 were aged 40-60. “However, the struggle for beds, oxygen and medicines is not fully resolved. Spikes are still seen in a less exposed population,” he said.

A civic official said the city’s positivity rate has stabilised at around 17% for the past few days. In a positive sign, for the first time in many weeks, the daily discharges were higher than the daily detections. A total of 74,045 people were sent home, taking the total discharges in the state to 34 lakh.

BJP Responsible for Covid Surge in Bengal, Will Urge EC to Ban Outsiders During Campaigning: Mamata