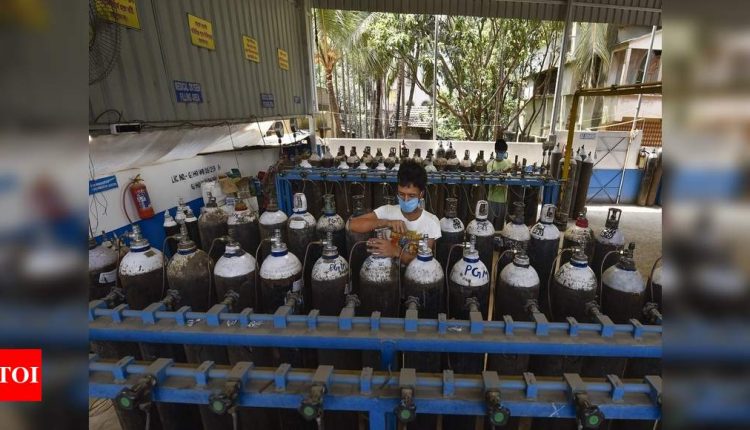 By admin On Apr 27, 2021
0
Share
NEW DELHI: The Centre on Sunday moved in with a fresh set of measures aimed at immediately increasing medical oxygen supply by over 20% while seeking to set up 551 dedicated medical oxygen generation plants at public health facilities across district headquarters, using funds from PM-Cares.
For immediate enhancement of oxygen supply for treating Covid-19 patients, industries have been ordered to restrict the use of liquid oxygen, including existing stock, and divert it for medical purposes. This is expected to add around 1,500 tonnes to the daily supply, estimated at 6,600 tonnes on Friday, government sources said.
Coronavirus: Live updates
The 551 Pressure Swing Adsorption (PSA) units are in addition to the 162 announced earlier, for which over Rs 200 crore was sanctioned. PM Modi has ordered that the facilities be made operational at the earliest.
Steel units and oil refineries have already stepped up supply of liquid oxygen produced at their plants and the move will not impact their manufacturing or refining operations, industry sources said.
Steel plants, for instance, require gaseous oxygen and set up captive units to produce the gas along with nitrogen and argon. These plants can produce 5-6% liquid oxygen at their peak capacity. Liquid oxygen is a highly pure product compared to industrial oxygen.
The Centre has asked states and Union territories to allow all manufacturing units to maximise their production of liquid oxygen and make it available to the government for medical purposes.
Plants can only optimise liquid oxygen production by sacrificing some gaseous oxygen and optimise process parameters, the steel ministry said.
“No exception is allowed to any industry with regard to use of liquid oxygen,” an order issued by home secretary Ajay Kumar Bhalla said.
The decision to limit the use of liquid oxygen to medical purposes by all industries was taken at a review meeting chaired by home minister Amit Shah on Sunday.
A home ministry official said the order would not affect the nine industry segments which had been exempted from the ban on supply of industrial oxygen by manufacturers and suppliers.
Separately, the government has asked major ports to waive all charges, including vessel-related and storage fees, for three months and accord highest priority in the berthing sequence to vessels carrying oxygen consignments.
Watch Covid-19: Industries to divert liquid oxygen for medical use
0
Share FacebookTwitterGoogle+ReddItWhatsAppPinterestEmail

IPL 2021: Rajasthan Royals Pacer Andrew Tye Expresses Surprise Over Companies Spending So Much on Indian Premier League at Such a Time