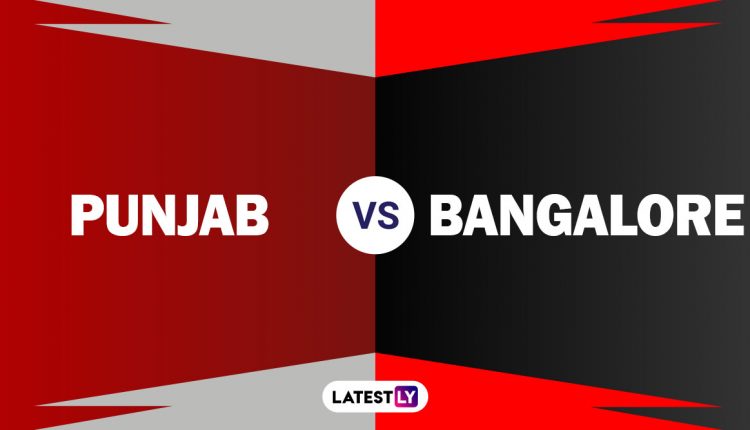 OUT! Another wicket for RCB. Kyle Jamieson picks Nicholas Pooran. Four ducks for Pooran this season! What a poor season this has been for the left-hander. Pooran c Shahbaz Ahmed b Jamieson 0(3)

OUT! End of Chris Gayle’s fine knock. Daniel Sams gets the big wicket. Gayle is caught behind. Big one this!  C Gayle c de Villiers b Daniel Sams 46(24)

Halfway through and Punjab Kings are in a good position. The partnership between KL Rahul and Chris Gayle is now worth 69 off 37 balls. KL Rahul is batting on 36 while Chris Gayle is on 45.

Halfway through and Punjab Kings are in a good position. The partnership between KL Rahul and Chris Gayle is now worth 69 off 37 balls. KL Rahul is batting on 36 while Chris Gayle is on 45.

Chris Gayle just smashed Kyle Jamieson for five fours in one over! That’s the end of Powerplay overs and probably the reason why Gayle went after him. PBKS back on track.

OUT! Kyle Jamieson comes into the attack and strikes in his first over. Prabhsimran Singh departs, he goes for a big shot and is caught near cover. Virat Kohli takes the catch.

KL Rahul and Prabhsimran Singh open the batting for Punjab Kings. Good start this for PBKS captain as he picks a boundary early on. Daniel Sams and Mohammed Siraj share the new ball for RCB.

RCB will look to continue their winning run as they face struggling PBKS. The Virat Kohli-led side have been in top-form and lost just one match so far. They start as favourites to win this clash as well.

Car-sharing startups emerge from pandemic with new lease on life