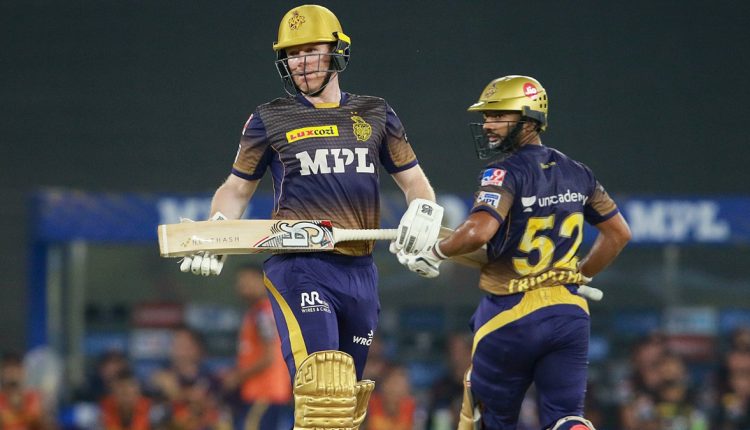 Kolkata Knight Riders beat Punjab Kings by five wickets to record their second win in IPL 2021. The victory took KKR to fifth in the points table. They are now level on points Mumbai Indians, Rajasthan Royals and Punjab Kings. KKR and PBKS have played two games more. KKR chased down the 123-run target quite comfortably in the end with captain Eoin Morgan leading from the front with a 40-ball 47 runs knock. They chased down it down in 16.4 overs with five wickets to spare. Take a look at the stat highlights of the PBKS vs KKR match. PBKS vs KKR Highlights IPL 2021.

Morgan and Rahul Tripathi’s 76-run partnership turned the match around for KKR after they been reduced to 17/3 at one stage. Chasing 123 runs to win, KKR were off to a worse possible start losing Nitish Rana in the very first over. Shubman Gill and Sunil Narine quickly followed and KKR were reeling at 17/3 in the third over. But Tripathi and Morgan arrested the collapse and stitched a 76-run partnership. Tripathi was dismissed for 32-ball 41 runs but KKR were in a strong position by then. They lost Andre Russell in between before Dinesh Karthik took them home with a short cameo. IPL 2021: Rahul Tripathi Takes Sensational Catch to Dismiss Mayank Agarwal During PBKS vs KKR Clash (Watch Video).

Earlier, KKR bowlers finally found some rhythm and restricted PBKS 123/9. All of the bowlers, barring Andre Russell who bowled one over, took wickets. Prasidh Krishna starred with 3/30 while Sunil Narine and Pat Cummins took two wickets each while Shivam Mavi and Varun Chakravarthy shared a wicket apiece. Take a look at the stats highlights from the PBKS vs KKR match.

# Chris Gayle was dismissed for a first-ball duck for the second time in the Indian Premier League. Both of his golden ducks in the IPL have come against KKR

(The above story first appeared on Scoop Buddy on Apr 26, 2021 11:48 PM IST. For more news and updates on politics, world, sports, entertainment and lifestyle, log on to our website scoopbuddy.com).

Tisca Chopra on Her Book What’s Up with Me?: Hope It Encourages People to Talk About Puberty, Periods and Many Such Topics