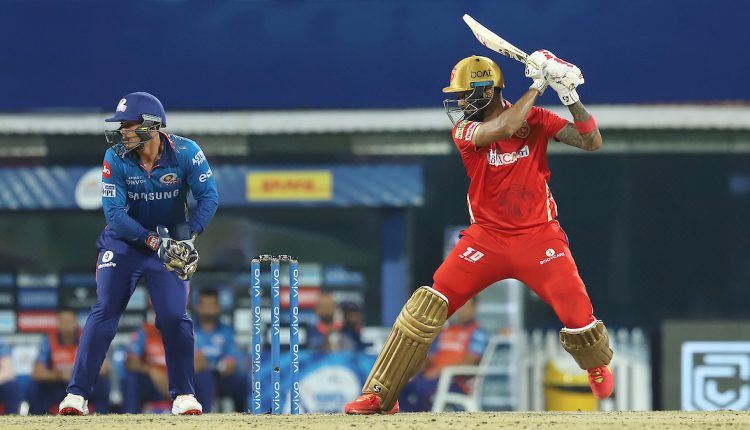 Punjab Kings kept themselves alive in the race to reach the IPL 2021 playoffs after beating Mumbai Indians by nine wickets at the MA Chidambaram Stadium in Chennai. Captain KL Rahul led the side with an unbeaten half-century after the bowlers had restricted Mumbai Indians to 131/6. Rahul’s fabulous knock of 60 not-out from 52 deliveries took PBKS over the line with the skipper also hitting the winning boundary to guide Punjab Kings to victory with 14 balls and nine-wicket to spare. Mumbai Indians captain Rohit Sharma also scored a half-century but no other batsman from the champion side managed to assist the skipper with only three MI batsmen reaching double figures. PBKS vs MI Highlights IPL 2021.

Mohammed Shami and Ravi Bishnoi were the stars with the ball with both bowlers taking two wickets each and finishing with identical figures of 2/21 in their four-over spell. The other bowlers also bowled tight lines and kept the run-flow in check. Rohit top-scored for Mumbai with 63 runs in 52 balls. The Hitman’s knock was studded with five boundaries and two maximums. But the next best score was 33 from Suryakumar Yadav and Kieron Pollard (16*) was the only other player to reach double figures. Take a look at some stat highlights from the PBKS vs MI match in IPL 2021.  IPL 2021 Points Table After PBKS vs MI Match: Punjab Kings Jump to Fifth in Latest Team Standings After Nine-Wicket Win.

# Mumbai Indians scored 21/1 in the powerplay against Punjab Kings. It is the lowest powerplay score this venue this IPL

# KL Rahul scored his 24th IPL fifty during the game. This was also his fifth half-century in six innings against Mumbai Indians

The win, meanwhile, took Punjab Kings to fifth in the points table while Mumbai Indians remained fourth in the standings. Both teams now have four points in five games each but the defending champions are only ahead due to a superior run rate. Mumbai Indians next play Rajasthan Royals in Delhi while Punjab Kings will face Kolkata Knight Riders in Ahmedabad.

(The above story first appeared on Scoop Buddy on Apr 23, 2021 11:47 PM IST. For more news and updates on politics, world, sports, entertainment and lifestyle, log on to our website scoopbuddy.com).

Varun Dhawan Birthday: From October To Street Dancer 3D – 10 Highest Rated Movies Of The Actor On IMDb And Where To Watch Them Online

India will be on faster growth path fuelled by infra: Nitin Gadkari