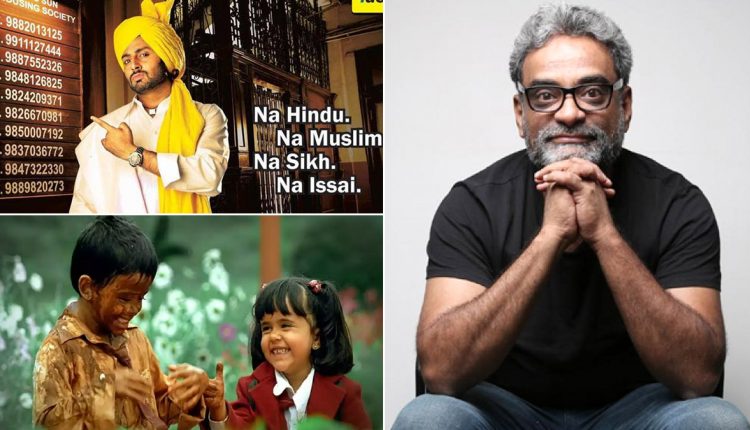 Today is R Balki’s birthday. We all know him as one of the credible directors in the industry with some amazing and ‘hatke’ movies under his belt. When mature romances were hardly mainstream, Balki debuted with Cheeni Kum with Amitabh Bachchan and Tabu playing the leads. The beauty of the film is despite having the underlying theme of a much older man romancing a girl half his age, it never tried to preach. Then he turned Bachchan into a kid and won hearts and then created a landmark film like Ki & Ka that talked about house husbands. Every movie of Balki is different and way more charming than the previous. Even when he got too obsessed with Bachchan in Shamitabh, it had a very intricate storyline. Guess that kind of understanding of storytelling can only come from a person who has spent decades in advertising. You will be astounded to know what gems Balki has given to the advertising industry as well. Dulquer Salmaan to Be Seen As the Protagonist in R Balki’s Upcoming Thriller?

On his birthday today, we decided to go back and look at the commercial which is the brainchild of R Balki. The ones that we still talk about.

Remember the video where a girl was upset that she got mud all over her uniform and her brother jumps in the puddle to get all soiled just to make his sister happy? Those two little kids charmed the whole nation and made everyone say Daag ache hai. Balki, who was the Chairman of ad agency Chairman and Chief Creative Officer of Lowe Lintas & Partners at that time, told Business Today, “The whole idea was if you are powerful you won’t fear your enemy, rather you’ll celebrate him.” And we did! R Balki Birthday: From Cheeni Kum to Paa, 5 Movies by the Director With Unconventional Plots

What an idea, Sirji – Idea Cellular

Idea entered the cellular market late but did a masterstroke with this Sirji series. Abhishek Bachchan solving social issues through a phone was at the heart of this idea. Social Samosa reports that “R.Balki stated that Idea as a brand had a very complicated baseline – something about technology that does something. What he was looking for was an extremely simple way of communicating it. Thus was the term conceived. While ‘Sirji’ was added later during scripting.” An ingenious ad to end caste war!

We all have a Bajaj story. The scooter that saw us grow up and we saw it grow old and then perish. There are many who still ride this nostalgic vehicle. What made it even more special was the ad campaign and the jingle Humara Bajaj. It included everyone who needed a scooter and the song that was inclusive. R Balki had told Campaign India once, “Right in the beginning, Bajaj was the vehicle that India rides on. Old ‘Hamara Bajaj’ captures the mood and the aspirations of the country then.”

Using a commercial to make you aware of why one needs to vote on an election day was simply unheard of then. But for Balki who talked about caste dynamics in the Idea ad, this is just the next big idea! It worked and how!

R Balki spearheaded this campaign where a kid used the broom as Gandhi’s stick to clean his colony which made many follow him in his path. It won the Grand Prix at Effies.

R Balki is said to be a man who made brands aware of being socially responsible by aligning their business with a cause. For that, we would like to truly appreciate his work.

(The above story first appeared on Scoop Buddy on Apr 22, 2021 08:10 AM IST. For more news and updates on politics, world, sports, entertainment and lifestyle, log on to our website scoopbuddy.com).

Going for Gold: How Competing in the Olympics Prepared Hans Struzyna to Be One of the Top Luxury Realtors in the Bay Area