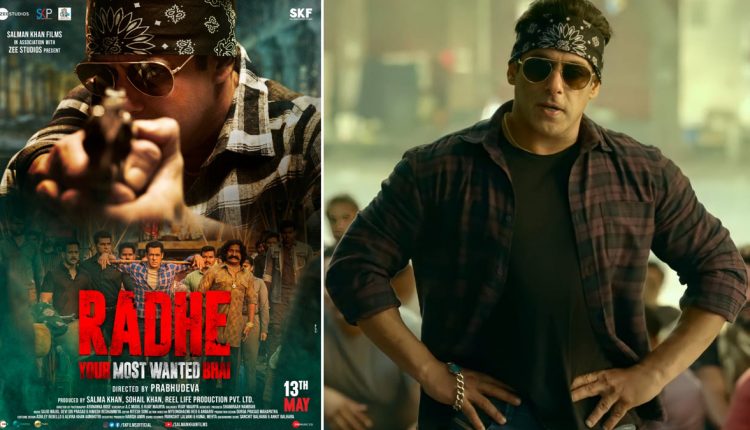 Hours after superstar Salman Khan warned miscreants of legal action for leaking his latest release “Radhe: Your Most Wanted Bhai”, producer Zee Entertainment Enterprises Ltd on Sunday filed an official complaint with the Cyber Cell. The action movie had a multi-format release in select theatres as well as on streaming platform ZEE5, pay-per-view service ZEEPlex and on DTH services on May 13. The movie presented by Salman Khan Films in association with ZEE Studios, was leaked online soon after its release. Radhe: Salman Khan Reminds Fans Watching Movie Illegally Is a Serious Crime; Says Cyber-Cell Is Taking Down Illegal Piracy Sites.

In an Instagram post on Sunday, Khan said watching a film on a pirated site was a “serious crime” and the Cyber Cell will be taking action against these illegal pirated sites as well as those using such platforms. “We offered you to watch our film ‘Radhe’ at a reasonable price of INR 249 Per View. Inspite of that pirated sites are streaming Radhe illegally which is a serious crime,” he wrote. In a note issued to the media, Zee Entertainment Enterprises Ltd said a complaint has been filed at the Cyber Cell, pertaining to the pirated version of “Radhe” being circulated across messaging platforms, including WhatsApp and Telegram. Radhe: Salman Khan and Disha Patani’s Film Collects $12,75,000 in Overseas Markets Over Two Days.

“The officials are tracking down the phone numbers involved in the act of piracy, taking the required legal actions,” the note read. The production company also appealed to the public to support the film industry in the fight against piracy. “Films create livelihood, employment and a source of income for millions of people working for the industry.” The note further said piracy is the biggest threat to the entertainment industry, which contributes towards the economy of the country in form of taxes paid to the government.

“People engaged in spreading the illegal version of the film, are not just embracing piracy, but are also negatively impacting the growth of the industry and the livelihoods of the people working for it round the clock.”. Prior to the film’s release, Khan had appealed to his fans to shun piracy and watch “Radhe” on the right platform. The actor had said it takes the hard work of several people to make a movie and it “hurts a lot when some take the route of piracy to watch the final product”. Directed by Prabhudeva, “Radhe” also features actors Disha Patani, Randeep Hooda, Jackie Shroff, and Gautam Gulati.