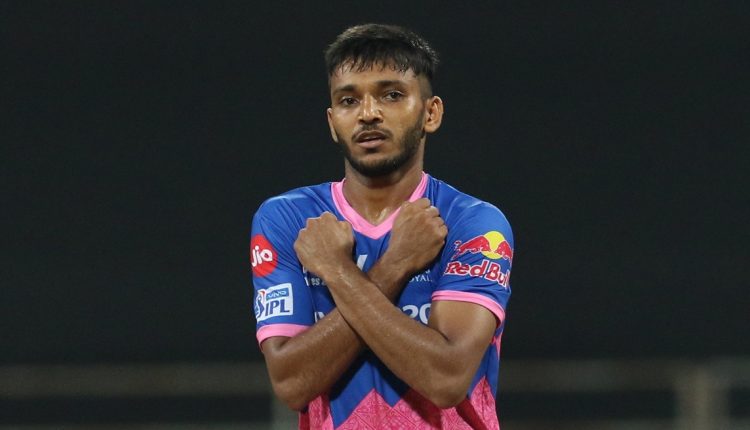 Rajasthan Royals has praised Chetan Sakariya for his heroics against MS Dhoni during Chennai Super Kings vs Rajasthan Royals at the Wankhede Stadium in Mumbai. He even scalped the most important wicket of MS Dhoni and the official account of the Rajasthan Royals praised the youngster for the same. The team posted a small video of Sakariya and had posted an interesting caption to go along with it. “Cheetah gets the Lion,” read the caption of the video posted by RR.  MS Dhoni got dismissed on the score of 18 runs from 17 deliveries. CSK vs RR Live Score Updates of VIVO IPL 2021.

Chetan Sakariya scalped three important wickets in the innings. He got rid of Ambati Rayudu (27), MS Dhoni and Suresh Raina (18). Talking about the game, team Rajasthan Royals won the toss and elected to bat first. None of the batsmen could actually settle on the pitch for a long time. Faf du Plessis was the highest scorer for the Chennai Super Kings in the first innings as he scored 33 runs from 17 balls. Moeen Ali made 26 runs.

Now, let’s have a look at the tweet by RR below:

Cheetah gets the Lion 🦁 pic.twitter.com/LxhJREbykX

A special moment for the youngster indeed. 💗

Chris Morris got a couple of wickets, Mustafizur Rahman and Rahul Tewatia got one wicket each. Chennai Super Kings made 188 runs on the board for the loss of nine wickets.

(The above story first appeared on Scoop Buddy on Apr 19, 2021 09:41 PM IST. For more news and updates on politics, world, sports, entertainment and lifestyle, log on to our website scoopbuddy.com).

Lamborghini in fast lane, delivers 2,422 supercars between January and March

Petrol in India cheaper than UK, Germany but costlier than US, China, Pakistan,…