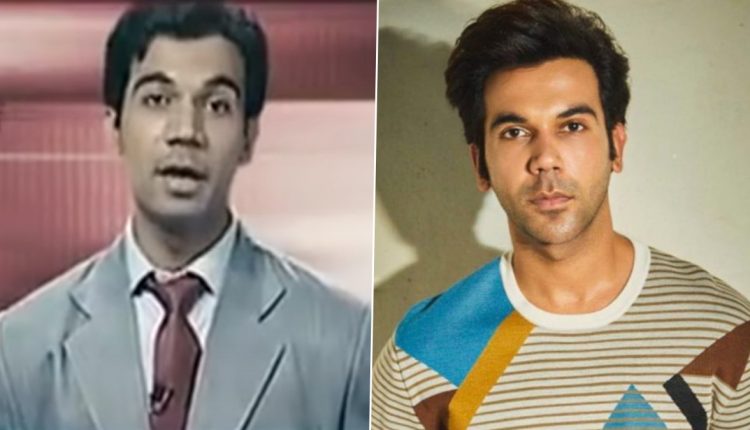 Rajkummar Rao Birthday: Did You Know The Actor’s First On-Screen Role Was in Ram Gopal Varma’s Rann And Not In Love Sex Aur Dhokha? (Watch Video)

Rajkummar Rao celebrates his birthday and we celebrate the triumph of an outsider in this star-kid inclined industry. His idol is Shah Rukh Khan and like the latter, he is a success story as well. In fact, like SRK, he too struggled to get his breakthrough role with Love Sex Aur Dhoka. While the latter is his first lead role, it wasn’t the first time he was seen on screen. Rajkummar had an uncredited role in Amitabh Bachchan, Riteish Deshmukh and Kichcha Sudeep’s Rann. It was directed by Ram Gopal Varma. Rajkummar Rao Talks About the Kind of Films He Wants in His Filmography

Rann spoke about a news channel and its main man. It speaks about how reporting is compromised for some personal gains on many TV channels. Rajkummar was seen for a few seconds as a news anchor. His role was uncredited. Rajkummar Rao Completes 11 Years in Bollywood, Thanks Fans for Their Love and Support (Watch Video)

Rajkummar struggled a lot but he has no complaints about the process. He had told IANS, “After finishing my study in Film and Television Institute of India (FTII), I was mentally prepared for the struggle in the film industry.  I knew that I was just one of those actors who came to Mumbai to achieve their dreams. So, I struggled and I have no complaints about that process.” He knew that nobody would welcome him with open arms and auditions were the only way to get a chance.

(The above story first appeared on Scoop Buddy on Jun 13, 2021 08:20 AM IST. For more news and updates on politics, world, sports, entertainment and lifestyle, log on to our website scoopbuddy.com).

SEATTLE WASHINGTON-Hiiwer is an American Brand, Focusing on Anti-Aging, and its Products are Positioned as High-End Health Products