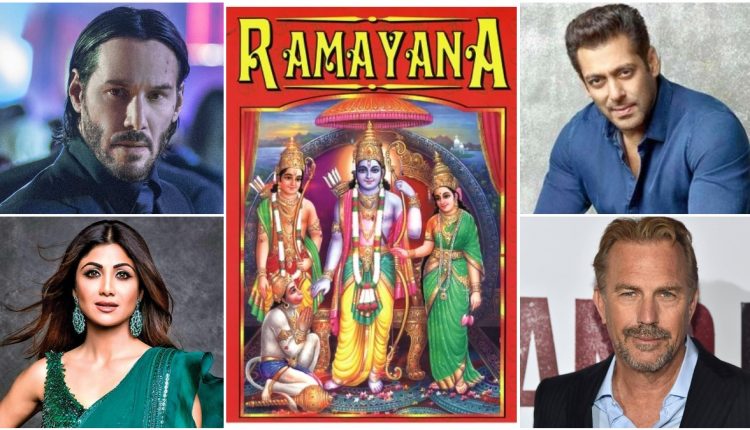 Yes, the headline might sound like some prank news story, but it did happen. Well, almost. We have had so many films made on Lord Ram in India, not just in Bollywood, with Ramayana even having some global appeal in its good winning over evil story. So inspired by the reach, a Hollywood-based Indian producer Uru Patel had the plan to set Ramayana in modern-day London and make an interracial love story out of it in 2012. For Lord Rama, he planned to cast Hollywood action star Keanu Reeves in the role.  John Wick: Chapter 3 – Parabellum Trailer Review: Keanu Reeves Fighting on Horseback Is the Most Badass Thing You Would See Today – Watch Video.

For Sita, Patel wanted to cast Shilpa Shetty, quite popular in the West then for her stint in the UK reality show, Big Brother. The Dark Knight star and Academy Award winner Gary Oldman and Dances With Wolves star Kevin Costner were both in consideration to play the modern-day Raavan.

The most interesting bit was that Patel wanted to rope in Salman Khan to play Lord Hanuman. Salman had played a role similar to the character of Bharat, Rama’s brother, in Sooraj Barjatya’s Hum Saath Saath Hai (which had Mohnish Behl and Tabu as their versions of Lord Ram and Sita). Even Jackie Chan was considered for the same role.

The Mask fame Chuck Russell was to direct the movie. He had recently made his first Indian film, Junglee, with Vidyut Jammwal in the lead.

Needless to say, after that initial buzz, the project fizzled out and we heard nothing about it. Salman Khan, later, went on to voice Lord Hanuman in the animated movie, Hanuman Da’ Damdaar.

Well, such a dream project was never to happen, despite the wishful thinking. Interestingly, there are quite a few Hollywood movies that sought inspiration from Indian epics, including Ramayana. Like, Roland Emmerich’s 10,000 BC had a close semblance to the premise of Lord Ram rescuing Sita from the clutches of Raavan.

Speaking more about Lord Ram, on April 14, India celebrates the festival of Ram Navami. The occasion is observed by the Hindus to mark the birth of Lord Rama, the seventh avatar of the Supreme Lord Vishnu. Lord Rama, as you know, is known as the Adarsh Purush thanks to his rigid belief in the code of conduct, and is the hero of one of the oldest epics in the world, Ramayana, written by Maharshi Valmiki. Ramayana and Mahabharata are two of the most beloved mythologies in India, and they have often inspired many plays, proses and movies.

(The above story first appeared on Scoop Buddy on Apr 21, 2021 07:15 PM IST. For more news and updates on politics, world, sports, entertainment and lifestyle, log on to our website scoopbuddy.com).