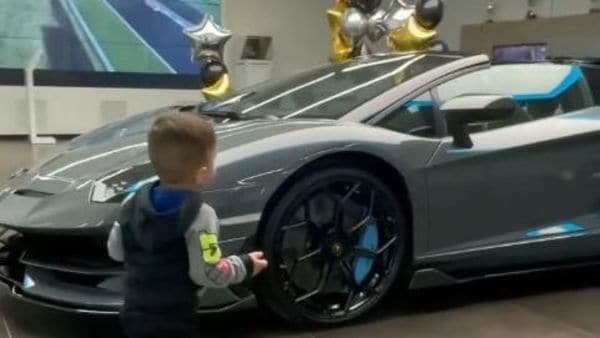 A Russian rapper has created ripples online after claiming he has presented his son with a Lamborghini worth crores. And because his son is just two-years-old and, obviously, cannot drive the supercar, the rapper also packed in a toy model of a Lamborghini.

37-year-old Timur Ildarovich Yunusov, popularly known as Timati, is believed to have said that his son can drive the Lamborghini Aventador SVJ once he is old enough to pass a driver test but till then, can make use of the toy Lamborghini. A video of the outlandishly expensive gift for the toddler was shared by Timati on his Instagram account and it quickly went viral. He has around 16.7 million followers on the platform.

Timati, also father to a seven-year-old daughter, has a number of very expensive vehicles and has reportedly said that both his children will have full access to all his cars once they are legally allowed to drive. It is just that till such a time, he himself would be zooming in all of these vehicles, including the Lamborghini Aventador SVJ which is otherwise termed as a gift.

Fans of Timati reacted in various different ways with a few even – and jokingly – asking him to adopt them. There were also many who slammed the rapper for what they termed as spoiling his young children with ultra expensive presents that they anyway can’t make use of for years and years.

Either way, the video on Timati’s Instagram account had garnered millions of views and continues to attract even more attention.

Zydus vaccine launch likely to be delayed due to issues at plant, Health News, ET…