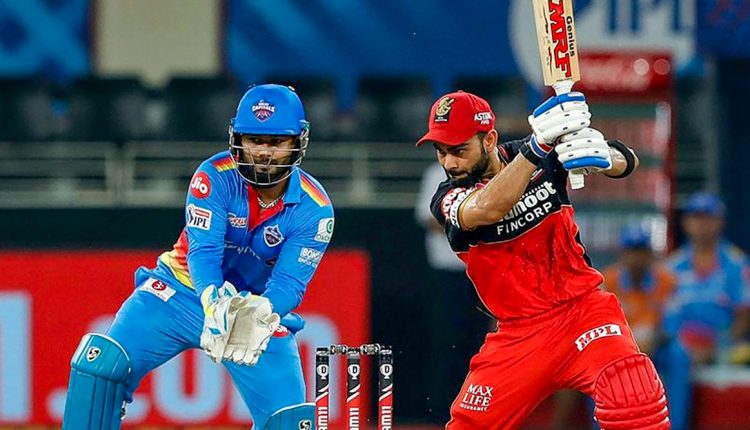 Some late impetus from AB de Villiers means RCB post a brilliant total at the trick Ahmedabad track. The South African dasher finishes at 75 off 42 balls as RCB muster 171/5 in their allotted 20 overs. Virat Kohli should be happy with his men’s efforts and DC have a job to do. Not to forget, dew will play a part as the game progresses.

The scoring rate has indeed gone down after Rajat Patidar’s departure but RCB don’t have any time to slow down with only three overs left in the innings. Fortunately for Bangalore, AB de Villiers is still out in the middle and he’ll want to earn as many runs as possible in the final few overs. However, the pitch is assisting the bowlers and De Villiers need a solid plan.

OUT! Finally a wicket for Delhi Capitals and it’s Rajat Patidar who has to go back after scoring 31 off 22 balls. The young dasher went for another big hit against Axar Patel but Steve Smith ran from long-on to complete a brilliant catch. Rajat Patidar c Smith b Axar 31(22)

Although RCB have lost wickets at regular intervals, the scoring has been on the upper side. AB de Villiers and Rajat Patidar have built a brilliant partnership and if they go on, RCB can put a match-winning score. Multiple boundaries have been smashed in the past few overs and with the death overs approaching, we expect to see many more.

OUT! Glenn Maxwell’s short but entertaining stay at the crease comes to an end. The Aussie dasher had already smashed two maximums in his innings but gets out while trying to hit Amit Mishra out of the park. He didn’t connect a big hit properly and found his compatriot Steve Smith at the long-on boundary ropes. Third one down for RCB. Maxwell c Smith b Mishra 25(20)

OUT! Another one bites the dust and its Devdutt Padikkal who has to make the long way back to the dug-out. Ishant Sharma gets his first wicket of the season as he destroys the stumps of the young opener with a brilliant away swinger. RCB are two down now. Devdutt Padikkal b Ishant 17(14)

OUT! Virat Kohli is gone and Avesh Khan gets the key wicket for Delhi Capitals. The RCB skipper has been undone by an inswinging delivery and Khan is delighted. What a tournament he is having! Kohli b Avesh Khan 12(11)

Steady start here for RCB as Virat Kohli and Devdutt Padikkal are looking Men in Some Mission. Both batsmen have respected the good deliveries but have also dispatched the loose ones. DC need to draw the first blood soon.

The players are out in the middle and the action gets underway. Virat Kohli and Devdutt Padikkal are the two openers for RCB while Ishant Sharma will start proceedings with the ball.

DC vs RCB Live Score Updates: Delhi Capitals are up against Royal Challengers Bangalore in match 22 of the VIVO Indian Premier League. The encounter takes place at the colossal Narendra Modi Cricket Stadium in Ahmedabad on Tuesday (April 27). Having won four of their first five games, both RCB and DC have made a stellar start to their campaign, making the upcoming game even more exciting. Moreover, the winner of this contest will advance to the top of the team standings, and both teams must leave no stones unturned to emerge victorious. Meanwhile, stay tuned for the live updates and commentary of the game. IPL 2021 Points Table Updated.

Rishabh Pant’s men are coming off a three-match winning streak and must be confident ahead of this fixture. However, the team management has some crucial decisions to make with R Ashwin withdrawing from the tournament amid COVID-19 concerns. Hence, either Ishant Sharma or Umesh Yadav can get a game here. The return of Chris Woakes might also be on the cards. DC vs RCB, IPL 2021 Live Cricket Streaming: Watch Free Telecast of Delhi Capitals vs Royal Challengers Bangalore.

On the other hand, RCB can also make some significant changes after their humiliating 69-run loss against Chennai Super Kings (CSK) in their last outing. Navdeep Saini, who leaked runs against CSK, can make way for Shahbaz Ahmed, with the Ahmedabad track likely to favour spinners.

Last night, we saw a low-scoring game when Punjab Kings and Kolkata Knight Riders locked horns in Ahmedabad. With this game taking place at the same venue, batters are expected to have another ordinary outing. Hence, the toss-winning captain should elect to bowl with dew likely to play a part in the evening.