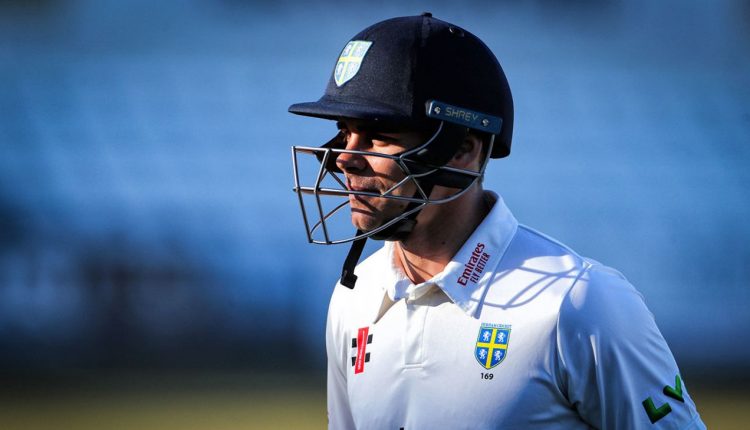 As David Bedingham left the field with the second highest Championship score in Durham’s history, the thought momentarily occurred that perhaps the relaid Riverside square would be about to turn its back on county cricket’s finest romance in favour of a life of celibacy.

After all, Durham were about to register 475 and Bedingham, in making 257 from 475 balls, had just completed a nine-hour stroll in which he had pretty much done as he pleased. Perhaps even Chris Rushworth, whose unwavering love affair with his home turf has been county cricket’s most productive partnership, would find that the relationship was over.

But this was Rushworth, this was April in the north-east and this was Derbyshire. Remember the old adage, warned one observer: “Never judge a pitch until Derbyshire have collapsed on it.” Or, as they would mutter this far north, “until Rushy has bowled on it”.

Twenty-one balls into his first home spell of the season, Rushworth had three wickets for six runs. By the close he had added a fourth, for his 500th Championship wicket, as Matt Critchley succumbed to a shooter that suggested Derbyshire will be in peril on the third morning.

“I’m not much for dancing, but for you I did,” whispered the pitch to Rushworth, winking an eye and quoting Taylor Swift.

To Derbyshire’s credit, they had settled to their task after Rushworth’s early incursions. Wayne Madsen and Matt Critchley are the heart of their batting side and they added 106 for the fourth wicket. By the close, though, they were hopelessly adrift at 148 for 5, still 178 runs away from avoiding the follow-on, and although this is an extremely placid surface, the uneven bounce, of which there is plenty, is unlikely to get any better.

New-ball wickets have always been part of cricket’s fabric, but the pattern seems more apparent than ever in this dry April with counties repeatedly shrugging off early collapses to make sizeable scores. Rushworth is the last person to waste that initial advantage and, after providing a hearty 11 not out as Durham’s last man, he was back on the square, bowling at a single stump, in the 10 minutes between innings.

There are no frills about Rushworth’s approach, nothing flashy, just an insistent line and length, the romantic-night-out equivalent of a few beers and a bag of chips. He beat Luis Reece’s outside edge in his opening over – once by Reece’s reckoning, twice by Rushworth’s. In his second over, Tom Wood’s imprecise pushes did not inspire confidence. He was on song. His shaven head was glistening with expectation. The breakthrough was coming.

Wood, selected because the captain Billy Godleman is injured, is beginning a second attempt to make the grade as a county cricketer, something that Rushworth could identify with, but he was not in the same parish as Rushworth brought one back to hit off stump. Two balls later, he ventured around the wicket to the left-handed Leus du Plooy and had him lbw, caught on the crease, his precision of line and length reasserted.

In his next over, Reece was strangled down the leg-side and, although his disconsolate body language and delayed exit told its own story, he would need to find a different camera angle to prove his case. Rushworth’s Championship wickets clicked on to 499.

As soon as Rushworth’s spell ended, the threat diminished. Durham’s seam attack is useful, as well as being the least hirsute in the country, as if most are intent upon a Rushworth tribute night, but Critchley and Madsen were untroubled.

Then Rushworth returned shortly before stumps. The unfortunate Critchley was bowled, his finishing position owing everything to the vagaries of the pitch rather than a desire to kneel in recognition of the bowler’s undoubted skill.

All this was somewhat more action-packed than the first half of the day, which was just about how many runs Bedingham would get. He began on 170 and it would be wrong to suggest he was entirely untroubled. A minute into the day, he edged Reece, but the pitch was so slow the ball fell short of Madsen at second slip. Reece stared at the ground as if he was doing a dissertation on worm holes. The chance was gone.

Bedingham dominated three successive century partnerships, two on the opening day, and as he became increasingly methodical, and partners came and went without much to note, the cricket became uneventful. Behind the metal glare of the Beach Volleyball Stand, a relic of the London Olympics, the Derbyshire coach was also glinting. It is tempting to suggest that several players wanted to be on it, but Derbyshire stuck to their guns.

Sam Conners, the Jimmy Anderson lookalike, was again the most resilient and was he was rewarded for his efforts with the first of what can be many Championship five-fors. It was one of his more routine deliveries, a widish one which Bedingham inside-edged to the keeper.

Bedingham’s gluttony was no more, Durham’s highest Championship score – 273 by the Australian, Martin Love, against Hampshire in 2003, not quite achieved. Conners raised his arm in Anderson style, but his punch of the arms was not very Anderson at all. Perhaps he needs to work on the impression.

India will be on faster growth path fuelled by infra: Nitin Gadkari