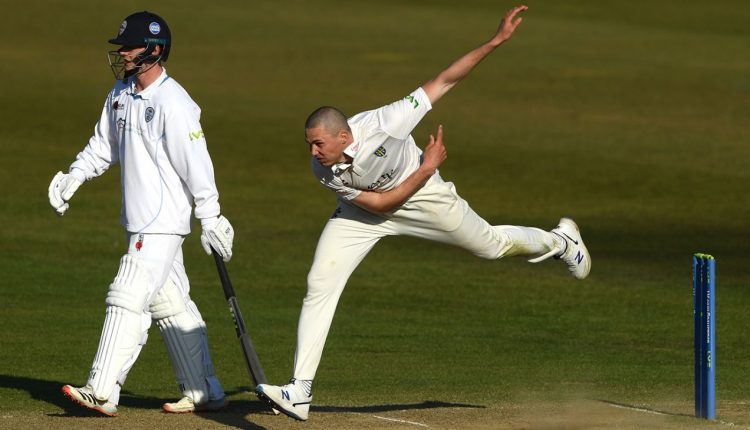 Durham enjoyed an outstanding first day of their LV= Insurance County Championship clash against Glamorgan, bowling the visitors out for 97 before ending the evening session with a lead of 126 at Emirates Riverside.

The two sides locked horns once again three weeks removed from their Royal London Cup final clash, where the Welsh outfit defeated Durham. However, the northeast side earned a semblance of revenge by skittling Glamorgan as Paul Coughlin tore through their line-up with four wickets.
Michael Jones led Durham past the visitors’ total with ease by scoring 81 alongside Alex Lees also notched a half-century, posting an opening stand of 119. The hosts were in a position of strength at 223 for 3 at the close.

Scott Borthwick inserted the visitors in the bright sunshine at Emirates Riverside, although the green colour of the pitch provided plenty of encouragement for the hosts. Chris Rushworth made inroads by dismissing David Lloyd lbw one delivery after the opener was put down at backward point by Lees. Hamish Rutherford responded and made the most of the hardness of the new ball, dispatching six boundaries in his run-a-ball 43.

However, the New Zealander’s tame dismissal to Rushworth sparked a collapse in the Glamorgan order, falling from 63 for 1 to 97 all out. The returning Coughlin notched a double-wicket maiden in his second over in his first match since suffering a knee injury during Durham’s Vitality Blast campaign.

Ben Raine and Rushworth kept the pressure on with three strikes apiece before Coughlin wrapped up the innings by removing Kiran Carlson and Lukas Carey, finishing with figures of 4 for 11.

Durham were solid in their reply from the off, taking the sting out of the Glamorgan attack. Their fifty partnership arrived in 106 balls and the openers were far from finished. Lees and Jones upped the ante to surpass the visitors’ first-innings total before working their way past a hundred for the opening wicket.

Jones displayed composure at the crease to register his third first-class fifty, working a Lloyd delivery down to third man to reach the milestone. Lees followed in the same over by crunching his eighth boundary through the covers. Michael Hogan made the breakthrough after tea to pin Lees lbw for 55.

Jones continued his impressive innings alongside Borthwick, who produced a number of elegant strokes in his knock of 29. Timm van der Gugten removed the Durham skipper, and then prised out Jones late in the day with the opener falling one short of his career best. David Bedingham fired an unbeaten 44 from 38 balls to strengthen Durham’s hold heading into the second day.

India’s EV wave is the future but Biofuels are changing the game now!, Auto News,…