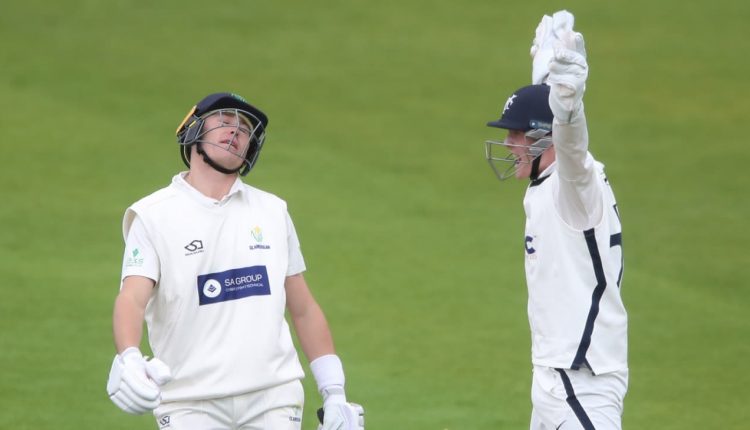 Anybody who googled ” Harry Duke” on May 14, 2021 would have found Prince Harry expounding on his newly-held belief in genetic pain. Search the scorecard and there was not a run, catch or stumping to be seen. It is fair to remark that Yorkshire’s debutant wicketkeeper has yet to capture the public eye.

But Harry Duke – that’s the teenage wicketkeeper from Wakefield and not the man sixth in line for the throne – can claim nevertheless to have made an immediate impact on his first day in the job, by playing a small but important role at the start of the Ashes phoney war.

“The battle that will decide the Ashes: Root v Labuschagne” was how one national newspaper billed Yorkshire’s visit to Glamorgan. Only Joe Root has made more Test runs than Marnus Labuschagne since he played in his first Ashes Test as a concussion replacement for Steve Smith at Lord’s nearly two years ago. If Ashes series can ever be determined by a single match-up, it’s a fair enough theory.

Root’s judicious unbeaten 34 was comfortably the outstanding innings on a taxing batting day in which 14 wickets fell, so enabling the game to stay “live” after the loss of the first day to rain. Yorkshire are still 80 behind on first innings with six wickets left, aware that the world could collapse around their ears at any moment. Kent were dismissed for 72 in the last match on this ground and conditions can’t have been much different.

Labuschagne, by contrast, only managed 10 from 18 balls for Glamorgan before he fell lbw to Ben Coad, displaying his frustration at his error with an incredulous shake of the head and a route march to short leg and back. But that error might not have happened had Duke not dared to stand up to the stumps to Coad, force Labuschagne to abandon his method of batting well outside his crease, and contributed to the malfunction.

Jonny Tattersall, who had been dropped to give Duke his chance, also stands up to Coad at times. But this was the first morning of a debut on a devilishly difficult pitch which offered the bowlers swing, seam and some uneven bounce. This was a 19-year-old on debut. This was a world-class batsman who might just nick one that would be easier to take standing back than standing up.

It brought to mind the pre-match comments by Martyn Moxon, Yorkshire’s director of cricket, when he reflected on the fact that the match would be televised. “Harry is a real competitor, a real scrapper and a battler, and he’ll thrive on that. He’s the kind of character who will relish the stage.”

No need to fret unduly then, about the damage that could be caused by giving Duke an unexpected headline then, even in Yorkshire where “too much too soon” was once the catchphrase of every club chairman in the county.

Labuschagne is having a lean time in this challenging English Spring. He has talked about the need to adjust his technique again for county pitches after becoming a little square-on to find more run-scoring opportunities against an India attack that bowled straight to him. His anxiety was perhaps illustrated before he had scored when he was sent back after Dom Bess had pulled off a fine stop at cover and would have been run out by a direct hit.

Jimmy Anderson, who also dismissed him cheaply for Lancashire last week on their first meeting, pointedly said it was “nice to get the first blow in” and then probably messed with Labuschagne’s mind even more by adding: “It’s like when you see a girl at a club and you try to play it cool; you want her to be impressed.”

Glamorgan were 82 for 7 immediately after lunch, total calamity prevented by David Lloyd and Billy Root, backed up by some tasty late-order flourishes. Lloyd, advanced up the order to opener this season, still drove freely during his 31, and survived missed slip catches by Root, at fourth, and Brook, at third, in reaching 10. Root’s was difficult; Brook’s was simpler, but the England captain (uncommonly) was to his right as well as the ball and these things can have an effect.

This was the day that Billy Root was awarded his county cap, a nice touch with Joe available for the brotherly fist bump after the ceremony at the tea interval. He has developed into a decent county player in his own right and, after he reached 23, it took a smart catch in his follow-through by Brook to remove him off a leading edge.

Brook, Yorkshire’s fifth seamer, collected 3 for 15 with his medium-paced inswing, Chris Cooke and Dan Douthwaite also falling lbw. Whenever Yorkshire’s attack lost its discipline the skipper, Steven Patterson, restored it. There were three wickets for him, too. Lloyd inadvisably left one which came back to hit his off stump and though the in-form Kiran Carlson got off the mark with his signature square drive, he then edged one that bounced a bit to first slip.

Yorkshire subsided to 36 for 4 in return, three of them to Michael Neser, whose presence enhances Glamorgan’s already competitive edge. Lyth’s dismissal owed everything to a springing catch at square leg by Carlson, Ballance cut to third man in somewhat giveaway fashion and Neser no doubt observed Brook’s pronounced, unbalanced trigger movement across his stumps and thought “I’ll have a bit of that”.

The day on Sky ended with both commentators covering an over in Welsh. At the end of the over the umpires ended the day because of bad light. The two incidents were not thought to be connected.

COVID-19 in India: Many Citizens of Australia Were Not Allowed to Board the Repatriation Flight After Being Found Coronavirus Positive