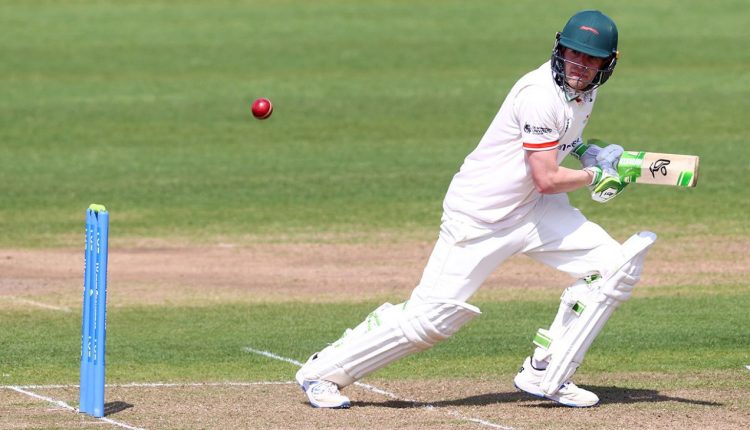 A disciplined batting performance gave Leicestershire the upper hand on the first day of the LV= Insurance County Championship match against Derbyshire at Derby.

Sam Evans faced 292 balls for 88 while Lewis Hill and George Rhodes also made half-centuries as the visitors took advantage of a flat pitch. Hill was unbeaten on 86 from 124 balls and Rhodes scored 54 from 84 balls to take Leicestershire to 282 for 3 at the close.

Lancashire’s on-loan seamer Ed Moulton claimed the wicket of Evans on his Derbyshire debut but it was hard going for the home attack.

With Colin Ackermann serving a one match ban because of a conduct breach by Chris Wright in the previous match, Callum Parkinson captained the side and chose to bat on a sunny morning. His decision was vindicated because despite a green pitch, there was little in it for the bowlers who took only one wicket in each of the three sessions.

Evans set the tone for a patient approach by taking 174 balls to reach 50 but it put Leicestershire in a position to go on and make a substantial first-innings total. Derbyshire at least kept it tight with legspinner Matt Critchley the pick of the attack and Leicestershire’s first batting point did not arrive until the 72nd over.

Ben Aitchison twice saw edges fall just short of the slips but Leicestershire passed 50 before Hassan Azad edged low to second slip where Wayne Madsen marked his return from nearly three months out with a hamstring injury by taking the catch.

Evans and Rhodes added 75 in 31 overs before Rhodes aimed a slog-sweep at Critchley and was bowled when the chance of a big score beckoned. That was Derbyshire’s last success for 44 overs as Evans and Hill raised the tempo to take the score well beyond 200 after tea.

Evans combined watchful defence with precise placement on both sides of the wicket but was given two reprieves in successive overs from Anuj Dal. On both occasions, the usually safe hands of Madsen failed to cling on when Evans was on 85 and 86 but he failed to take advantage as Moulton struck late on.

Evans got an inside edge into the gloves of Brooke Guest as he pushed forward but with Hill unbeaten at the close, it was very much Leicestershire’s day.