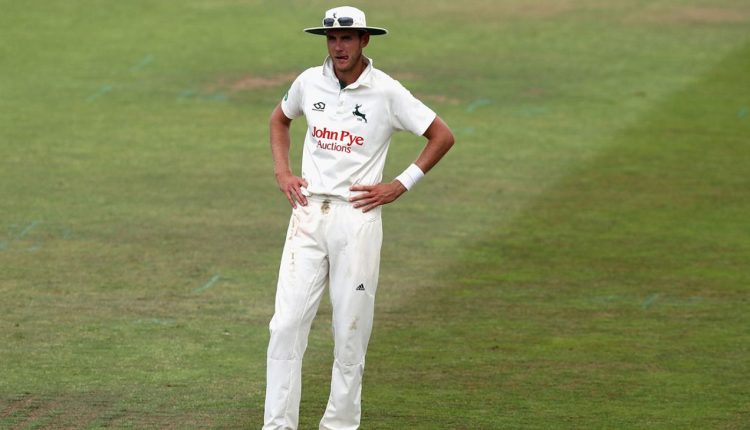 It’s been cold in England in recent days. Horribly cold. There’s been frost on the ground most mornings and a host of games in the first round of Championship action were ruined by snow. Even when the sun has appeared, it’s been accompanied by a wind that feels as if it could rip the skin from your face. Captain Oates wouldn’t venture out in this weather.

But at some stage in the last few days, Stuart Broad decided he’d had his feet up for long enough. He asked the England and Nottinghamshire management if he could return to action early.

He didn’t need to play. He could have sat at home by the fire. He could have come into the ground for a massage and perhaps turned his arm over gently in the indoor nets. He could have returned in another three weeks and still have had time to prepare for the Test series against New Zealand.

But then Broad didn’t need to reinvent himself as a bowler at an age when others might have been thinking of moving into the commentary box. He didn’t need to reassess his career, accept he could no longer rely on the skills that had earned him more than 400 Test wicket and remodel first his run-up and then his modus operandi.

The Broad that ruined David Warner’s 2019 Ashes and dominated the 2020 Test summer was a very different beast to the one that helped England to the Ashes in 2009. Perhaps a little of the pace had gone. But he had recovered his outswinger. He had learned to master the wobble-seam. He had accepted that he was, in essence, no longer an outright fast bowler but a pitch-it-up wicket-to-wicket seamer with a decent bouncer when required.

It takes a certain hunger to go back to basics when you have a reputation as one of the world’s best bowlers. A certain humility, too. And, most of all, a love of the game. A love of the battle, a love of the team environment and a love of the club where he once watched his father play. Broad knows he’ll never have a better job. He looks determined to enjoy every moment of it.

‘Wait there,’ you might be thinking. ‘He’s only doing what he’s paid to do.’ And it’s true, up to a point. But fast bowling is hard. It jars ankles, knees and hips. It tears out toenails and pulls skin off heels and soles. Fast bowlers have feet that would turn a billy-goat’s stomach. Broad did not need to be here and it says speaks volumes for his commitment that he is.

This spirit of self-improvement may well have been inculcated into the England side by James Anderson. Very few fast bowlers have improved in their late 30s. But Anderson has endured rehab and flat pitches to reach a new level of expertise at an age when previous generations of seamers were growing fat and flabby. All those vying to play alongside him have been left in no doubt as to the standards required.

Broad hasn’t just been easing his way into action here, either. He has demonstrated the same sense of urgency as if the crowd had been full and the Ashes on the line. He’s demonstrated the same sense of certainty in his appealing, the same aggrieved sense of shock when a decision goes against him. Maybe, by his high standards, he might have wanted to make the batsmen play a bit more often. Maybe, by his high standards, he slipped onto the legs a little more than he would have liked.

But his presence here, charging in for a new spell late on the third evening, was a delight. He has claimed only one wicket to date in the Warwickshire second innings – Rob Yates undone by one angled into him – but his battle with Hanuma Vihari was a fine advert for the value of this competition. It underlined the high standards and competitiveness of the Championship at its best. It made the point that this stuff matters.

Warwickshire made that point on the third day, too. They put up a real fight. Coming into it with a deficit of 200 – a substantial number on a surface offering variable bounce and lateral movement to bowlers of all varieties – they will have known that the game was all but gone. But there was no sense of the inevitable as they redoubled their efforts and resolved to make Nottinghamshire fight for every run.

So it was that seven of the day’s first 17 overs were maidens. The 32-over first session yielded only 60 runs and accounted for Joe Clarke and Haseeb Hameed who both received deliveries pitching in line, demanding a stroke and leaving them, that might reasonably be described as unplayable.

It’s been more than a thousand days since Nottinghamshire won a first-class match, though, and they weren’t going to let this opportunity slip. Lyndon James, who looks a terrific prospect, and Steven Mullaney added 57 in 29 overs of graft that probably put the result beyond doubt. But every run had to be hacked from Warwickshire’s grip.

Eventually Olly Stone, who has bowled 41 overs in this match without losing pace or hostility, made the breakthrough as Warwickshire claimed four wickets for three runs in 15 balls.

Danny Briggs was the main beneficiary. Briggs is desperate to prove himself having lost his way as a first-class cricketer over the last couple of years. Here, benefitting from a patch of rough outside the left-handers’ off-stump, he bowled with control, subtlety and skill and claimed as many wickets – four – as he had in 2019 and 2020 combined.

Perhaps his first – that of Mullaney, who slapped a short one to point – was a touch fortuitous, but Liam Patterson-White was bowled by one that turned sharply out of the rough to leave Briggs on a hat-trick. Broad denied him that but Briggs still struck with his next delivery – Tom Moores bowled off the inside edge by another turning out of the rough – to give him three wickets in four balls. When Dane Paterson heaved a catch to the outfield, Briggs had taken four wickets for eight runs in 16 balls. Figures of 0 for 60 soon became 4 for 68; his best analysis since 2016.

That left Warwickshire facing the prospect of chasing 333 to win in a minimum of 130 overs. With little prospect of Dom Sibley batting, there was much required of Vihari. But when he missed a straight one and Will Rhodes was trapped in front from another that turned from the footholes, it left Warwickshire deep in trouble. It will take something close to a miracle to deny Nottinghamshire now.

Sanket Bhosale And Sugandha Mishra Get Engaged; Three Times The Comedian Hinted About Getting Married To The Kapil Sharma Show Actress (Watch Videos)