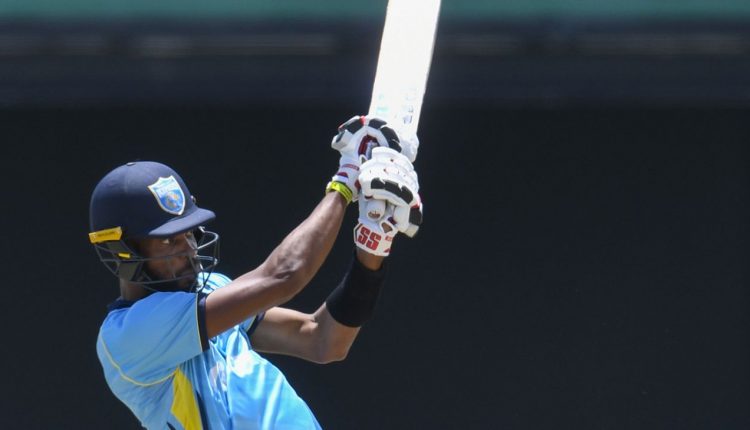 The same two teams played at the same venue for a second day running, and St Lucia Kings got the better of St Kitts & Nevis Patriots once again, but this time on an entirely different sort of pitch. Having ended Patriots’ five-match winning streak by powering their way to 224 on Saturday, Kings completed the double with a far scrappier performance in a low-scoring game, with Roston Chase sealing the deal with his third straight half-century of the season.

They got home with six wickets in hand and 26 balls remaining, but the match was closer than the scorecard indicated, with missed chances costing Patriots the possibility of a tense finish.

The pitch used on Sunday offered help for the spinners as well as disconcerting bounce when the fast bowlers hit the shorter lengths, and Kings’ well-balanced attack kept Patriots to 118 after the home team opted to bowl. Left-arm spinners Jeavor Royal and Samit Patel returned combined figures of 5 for 35 in eight overs, and Wahab Riaz conceded just 17 in his four overs while getting the prize early scalp of Chris Gayle with a lifting, seaming delivery in the corridor.
Patriots could have ended up with far less, but Fabian Allen dragged them into three figures with an uncharacteristic knock. He came in at 59 for 5 in the 10th over, and was on 6 off 19 balls – with Patriots eight down – when he hit his first boundary. By then, though, he seemed to have the measure of conditions, and he hit 28 off his next 12 balls – with his flat-bat hitting of short-of-length balls over the covers a particular highlight – before falling in the 19th over.

Without a significant total to defend, Gayle was aggressive with his captaincy, packing the infield even after the powerplay, and stationing a slip for most of Kings’ innings. He started with Allen’s left-arm spin and bowled him out in one spell, and was rewarded with two wickets – Andre Fletcher out first ball to a contentious lbw call, and Faf du Plessis caught at mid-on. Allen could have had a third with the last ball of his spell too, but his drifting arm ball sneaked between Chase’s bat and pad and bounced over the stumps.

The next two overs produced three chances but just the one wicket, as both Naseem Shah and Paul van Meekeren got the short ball to rear awkwardly. Keron Cottoy was put down by Fawad Ahmed at fine leg, but he fell next ball, slicing a catch to backward point. Then both Chase and Samit were early on the pull, only for Colin Archibald to put the former down at mid-off and for van Meekeren to lose the ball in the sun off his own bowling and let off the latter.

Kings could have been five down at the end of the ninth over. Instead, they were just three down with 55 needed from 66. Chase took over thereafter, lofting Fawad and Archibald for exquisite sixes over extra-cover to rush towards his fifty, eventually bringing it up off just 36 balls.

Samit fell with 19 left to get, but that was no ray of hope for Patriots, as Tim David came out and smacked two sixes in just seven balls to end the game in a hurry.

Karthik Krishnaswamy is a senior sub-editor at ESPNcricinfo