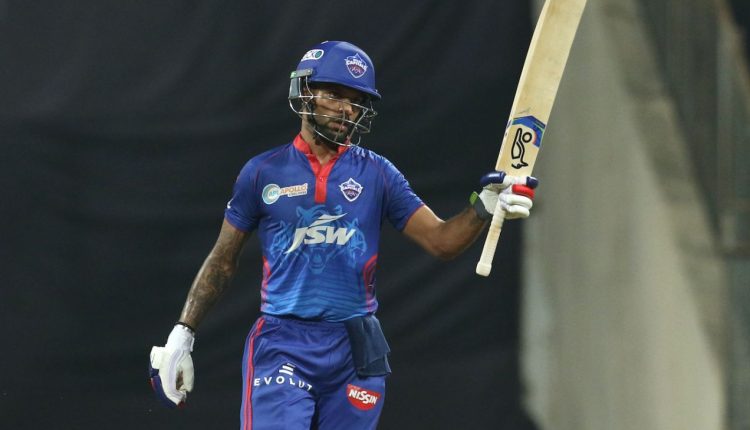 Shikhar Dhawan’s 49-ball 92 outshone Mayank Agarwal and KL Rahul’s half-centuries as the Delhi Capitals beat the Punjab Kings by six wickets in a run-fest at the Wankhede Stadium.

After being sent in, Mayank Agarwal and KL Rahul gave the Kings a blazing start of 122 in 12.4 overs. Agarwal was the aggressor, hitting seven fours and four sixes in his 36-ball 69, while Rahul played second fiddle with 61 off 51 deliveries.

The Kings posted a formidable 195 for 4 but Dhawan and Shaw laid the platform for the Capitals’ chase with a start of 59 in 5.3 overs.

After that it was the Dhawan show. Targeting primarily the leg side, the opener struck 13 fours and two sixes and kept the Capitals on par with the required rate. For the second time in three games he had a chance to score a hundred. He failed once again but his knock had put the Capitals ahead. So much that when Marcus Stoinis hit the winning boundary, there were still ten balls left.

Agarwal, Rahul provide dream start
Chris Woakes conceded only five in the opening over but a 20-run second over opened the floodgates for the Kings. That over, left-arm seamer Lukman Meriwala’s first in the IPL, featured a dropped catch, a misfield, a no-ball, three fours and a six. By the end of the fifth over, Agarwal and Rahul had added 50, of which the latter’s contribution was a run-a-ball 18.

Kagiso Rabada was introduced into the attack in the sixth over; Rahul greeted him with a four through point but largely looked subdued. Agarwal, meanwhile, was batting on a different plane. With a four off Avesh Khan, he raced away to his fifty in just 25 balls.

The harshest punishment was perhaps meted out to arguably the best bowlers in the Capitals’ side. On the first ball of the 11th over, Agarwal cleared his front leg and launched Rabada over long-off. Rabada responded with a bouncer but erred down the leg side. Agarwal swivelled and pulled it over fine leg for another six. A ball later, Rahul too joined in with a six over deep square leg.

Meriwala eventually broke the stand when Agarwal holed out to sweeper cover trying to reach out for a wide delivery.

Gifts aplenty for birthday boy Rahul
It was Rahul’s 29th birthday and it looked like the Capitals’ fielders didn’t want to spoil his day. Smith dropped him in the second over, Shaw failed to hold on to a screamer in the 12th and Stoinis grassed a regulation chance in the 15th. Rahul was on 9, 42, and 50 respectively; Meriwala the unlucky bowler on the first occasion, Avesh on the next two.

Stoinis eventually made amends when he caught him off Rabada in the 16th over.

Hooda, Shahrukh take Kings close to 200
Deepak Hooda continued his good form with an unbeaten 22 not out off 13 balls. Coming in at No. 4, he smashed Rabada for six off the first ball he faced. Later, he went down on one knee to carve Avesh over the extra-cover boundary for another.

Chris Gayle and Nicholas Pooran fell in search of quick runs, leaving the Kings 179 for 4 after 19 overs. Shahrukh Khan, though, muscled Woakes for two fours and a six in the final over to take the side close to 200.

Dhawan-Shaw onslaught
Chasing 196, Dhawan and Prithvi Shaw didn’t waste any time and gave their side an even better start than the Kings had got. Rahul tried four different bowlers in the first four overs – Arshdeep Singh, Mohammed Shami, Jalaj Saxena, and Jhye Richardson – and each one of them went for at least ten in their respective overs.

Dhawan continues the carnage
The Capitals openers were running away with the game, just like they had done against the Chennai Super Kings while chasing 189, but Shaw ended up miscuing a pull against Arshdeep and fell for a 17-ball 32. Steven Smith laboured for a 12-ball 9 before his ugly swat against Riley Meredith was caught at third man.

Dhawan, though, kept batting in the same vein. Having reached his fifty in 31 balls, he stepped out against Shami and hit him for a six over long-on.

But it was the 14th over, bowled by Meredith, that turned the game decisively in the Capitals’ favour. Dhawan started the over by hitting the first three balls for fours. The next delivery went for five wides down the leg side. By the time the over ended, Dhawan had moved into the 90s and the Capitals needed 53 off 36 balls with eight wickets in hand.

Stoinis sees the Capitals home
Dhawan fell eight short of a hundred when he was bowled while trying to swipe Jhye Richardson fine. From the other end, Arshdeep bowled a quiet over to make it 36 needed from 24 balls. But Stoinis quelled any hopes the Kings may have developed by hitting two fours and a six off Shami in 17th over. He also hit the winning runs, dispatching Meredith to the midwicket boundary for four to finish with an unbeaten 27 off 13 balls.