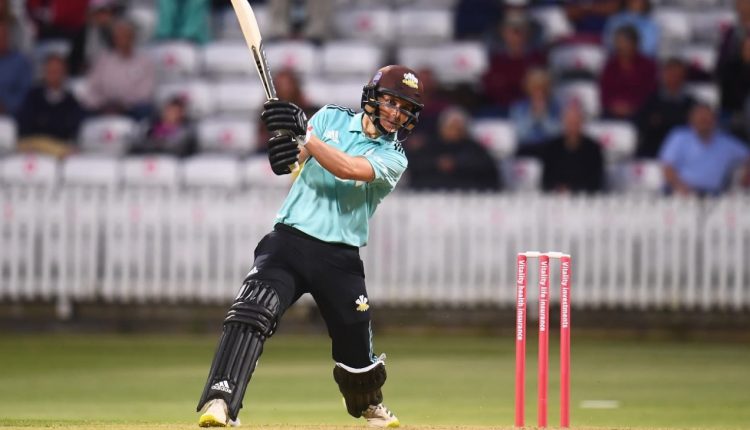 Surrey are strutting – and how. On the back of their immense performance against Middlesex in the London derby, they withstood a six-hour journey to the West Country to dispense with Somerset in equally bullying fashion. Somerset’s 187 for 6 felt a little inadequate, but Surrey wolfed it down, and spat it out, by seven wickets with four overs to spare. Awesome stuff.

Surrey had made 223 for 7 at Lord’s, the highest score in 72 domestic T20 matches on the ground, and their mood had not shifted. Will Jacks, who had made the fastest T20 half-century in 11 years at Lord’s, fell cheaply to Josh Davey, but Jason Roy pummelled the Powerplay and then Laurie Evans and Sam Curran produced a stand of 104 in 52 balls for the third wicket that made light of the chase.

Evans’ power-hitting is well known, and he looked in prime form against wayward bowling, but Curran’s not so much. He has five T20 half-centuries and many predict that batting will ultimately become the dominant part of his all-round status. But his unbeaten 72 from 36 balls, with six sixes and five fours represented a career-best and, perhaps, a new level.

Some of the sixes, to be frank, needed hitting, especially the two from legspinner Max Waller which set him on his way, but by the time he hauled Ben Green over midwicket, with victory nearing, there was a venom in his strokeplay that showed the gulf between the sides. Once the hundred was raised in the eighth over, it was just a matter of time.

Somerset, with Jack Leach and Craig Overton on England duty, look a little thin on options. Their home matches are coming thick and fast – they face Kent at Taunton on Tuesday – and although they have only lost their first two in a 14-match league, they need a reversal of fortunes and fast.

Two evenings earlier, on the same ground, Somerset had posted 185 for 7 against Essex and been beaten by three wickets with seven balls to spare. At the interval, the balance felt identical – with the added pessimism that Surrey’s batters had gone stratospheric in their defeat of Middlesex.

Watch Somerset regularly and, for all their talent, one of the recurring themes is their captain, Tom Abell, resolutely trying to put things right. There are many excellent professionals in county cricket, but very few who give the impression they are so committed to the cause with every breath of their being.
The outcome of that determination was 69 off 44 balls. Abell has had to work to become a T20 cricketer and, apart from his trademark scoop, which he executed perfectly against Tom Curran to reach his fifty, his game is based on intelligent shot selection.

Somerset had a decent Powerplay – 63 for 2 – and, after Tom Banton had left early, reaching at a wide one from Sam Curran to fall at short third man, much of that was down to Will Smeed, who stepped in for the injured Roelof van der Merwe at No. 3, and struck 23 from 13 balls. If van der Merwe was missed, it was with the ball.

Smeed is a product of King’s College, Taunton, the alma mater of such luminaries as Jos Buttler, Banton and James Hildreth and, if Somerset’s production line seems, shall we say, somewhat niche, there is no denying its quality. As for Smeed, he was impressive from the outset. In his first two balls, he probably just wanted to get a bat on ball, but found to his delight that he had smoothed Matt Dunn to the cover boundary and stolen a neat single off the next. He was unfortunate to pick out Roy at backward point.

Once James Hildreth fell lbw to Gareth Batty (one of a handful of players to have figured in all 18 seasons of the Blast) Somerset faltered. Surrey’s victory owed as much to the post-Powerplay spin squeeze applied by Batty and the slow left-armer Dan Moriarty. By the time Eddie Byrom fell to Tom Curran, cutting, Somerset’s conservatism against some well-drilled overs had become costly. With Marchant de Lange a place too high at No. 8, it was understandable why: without the Overtons (Craig with England, Jamie with Surrey), Somerset are struggling for balance.

An 18-run over against Tom Curran, with Abell to the fore, helped to give Somerset a vaguely competitive total, but when Abell fell with 15 balls remaining, mistiming a big leg-side hit against Dunn’s off-cutter, the writing was on the wall.

RBI hikes fee banks pay for use of other lenders’ ATMs

Meet Arjun Dhingra: A Natural Entrepreneur With A Passion For Leadership