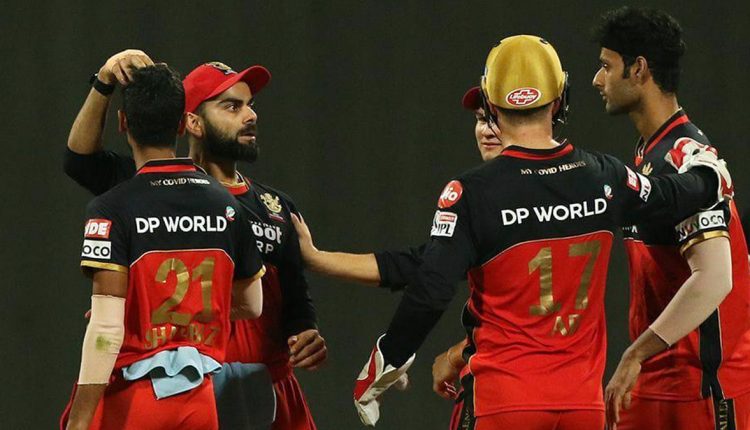 Royal Challengers Bangalore lost to Chennai Super Kings in IPL 2021 match on Sunday.  They lost to CSK by 69 runs, courtesy of Ravindra Jadeja’s all-around show in the match at the Wankhede Stadium in Mumbai. Post this, Virat Kohli and men are all set to take on Delhi Capitals at the Narendra Modi Stadium in Ahmedabad in Gujarat. Ahead of the game, RCB posted a picture of the team in the huddle and promised that the team will come back stronger. The team also had a caption to it which read, “Time to regroup and come back stronger, harder, better.” IPL 2021: Virat Kohli Fined Rs 12 Lakh for Royal Challengers Bangalore’s Slow Over-Rate Against CSK.

Talking about the game, it was Ravindra Jadeja who not only contributed with 62 runs but also scalped three wickets. He even inflicted a run-out in the game. None of the RCB batsmen could actually sustain the lethal bowling attack and the team could only put up 122 runs with nine wickets. RCB’s poster boy Devutt Padikkal could only score 34 runs from 15 balls.

Now, let’s have a look at the picture posted by the RCB on social media.

After the loss, Virat Kohli also said that the team will have to take everything in their stride. He also spoke about Harshal Patel who conceded 37 runs in an over and mentioned that he will learn from the mistakes made during the game.

(The above story first appeared on Scoop Buddy on Apr 26, 2021 02:15 PM IST. For more news and updates on politics, world, sports, entertainment and lifestyle, log on to our website scoopbuddy.com).