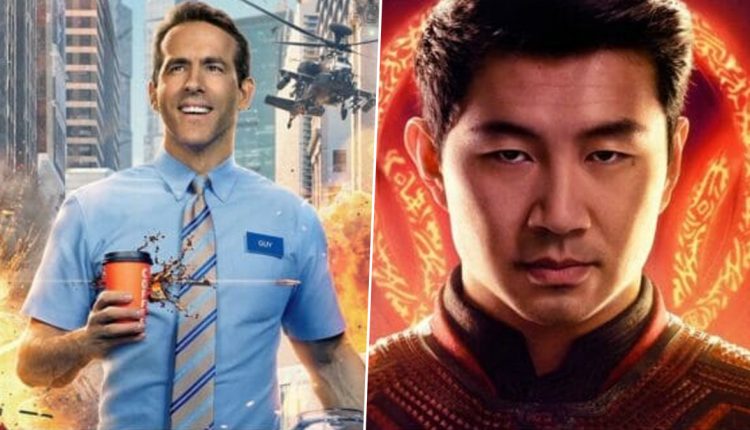 Ryan Reynolds’ Free Guy, Marvel’s Shang-Chi to Get Exclusive Theatrical Release For Box Office Revival and Will Hit to Disney+ After 45 Days Run

As the Hollywood box office is gearing up to recover, major production houses 20th Century’s Free Guy and Marvel Studios Shang-Chi and the Legend of the Ten Rings are among the Disney event titles that will have exclusive theatrical releases, versus getting a hybrid release on Disney+. According to The Hollywood Reporter, CEO Bob Chapek confirmed the news during an earnings call Thursday. Camila Cabello’s Cinderella to Skip Theatrical Release and Will Premiere Straight on Amazon Prime Now.

The Ryan Reynolds-starrer ‘Free Guy’ will be hitting theatres on August 13, on the other hand, the Simu Liu-starrer ‘Shang-Chi’ is set to arrive on big screens on September 3. Both will have a 45-day exclusive run in cinemas. Although the recovery of the global box office won’t be instantaneous, Chapek proclaimed that return to moviegoing is now within sight. Mark Wahlberg’s Infinite Skips Theatrical Release, Antoine Fuqua-Directed Sci-Fi Thriller Heading Straight to Paramount Plus.

Per The Hollywood Reporter, plans for ‘Free Guy’ and ‘Shangi-Chi’ are in stark contrast to several upcoming Disney tentpoles planned for release between now and the end of July. Other major releases including ‘Cruella’ (May 28) and Marvel Studios’ ‘Black Widow’ (July 9) are going day-and-date in theatres and on Disney+ Premier. The studio previously released ‘Mulan’ under the Premier branding.

As unveiled by The Hollywood Reporter, before the pandemic struck — resulting in yearlong theatre closures — Disney enjoyed a historic run at the box office and was a favourite of theatre owners. The COVID-19 crisis and the rise of streaming led many to wonder how committed to theatrical Disney will remain post-pandemic. A hybrid day-and-date release in 2022 could be more difficult to pull off if cinemas make a full recovery since circuits could refuse to play any title that doesn’t have an exclusive theatrical window. Nor is it clear how much a new film benefits Disney+ since viewership numbers for a particular title aren’t disclosed.