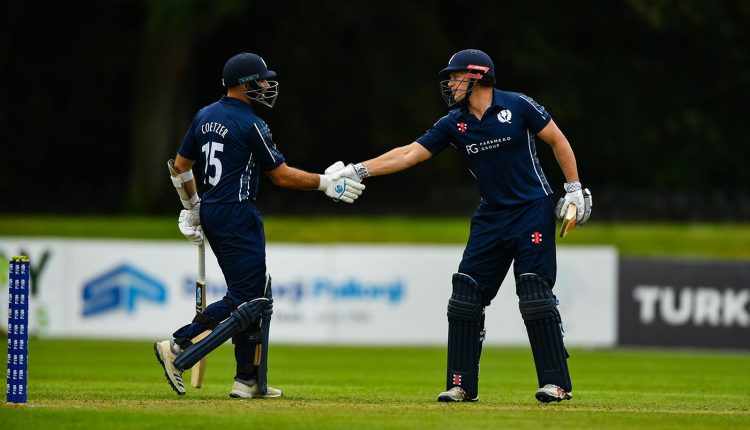 Scotland to play two ODIs against Netherlands in May

Scotland have not played international cricket since December 2019

Scotland will end their lengthy international cricket hiatus in May with a two-match ODI series against Netherlands in Rotterdam on May 19 and 21. Under the UK government’s tiered plan to return to normalcy in the wake of the ongoing structured lockdown for Covid-19, unrestricted international travel is set to be lifted on May 17 while Scotland’s government has also targeted that date for the resumption of outdoor contact sports.

“It’s been a long wait for the players and staff, but we have been working hard behind the scenes to ensure that the team are able to start playing international cricket again as soon as possible and we are delighted to be able to announce these matches against the Netherlands,” Cricket Scotland chief executive Gus Mackay said. “I’d like to thank everyone at KNCB (Netherlands cricket board) who has worked so hard with us to make these fixtures happen while respecting all COVID-19 protocols. It’s great to be looking ahead to international cricket again after so long without a match.”

For the Netherlands, these will be the first ODIs since June 2019, when they played Zimbabwe. Netherlands were due to tour Namibia in March 2020 for three ODIs and were also scheduled to host Pakistan in July 2020 for their first home fixtures in the 13-team ODI Super League, but both series were postponed because of the pandemic. Netherlands resumed international cricket this past weekend with a tour of Nepal for a T20I tri-series along with Malaysia.

Scotland have not played any international cricket since their Cricket World Cup League Two ODI tri-series tour of the UAE in December 2019 against the hosts and USA. Their next series was supposed to be held in April 2020 in Florida against the USA and the UAE but the tour was postponed just two weeks prior to the first match as the scope of the pandemic become apparent.

Scotland’s next home fixtures are currently scheduled for July, when they will host Nepal and Namibia for a League Two ODI tri-series. Scotland’s squad returned to training this month after nearly a year of having their salaries furloughed. In addition to the announcement of the ODIs in the Netherlands, Cricket Scotland announced a list of 13 players who have signed central contracts for the 2021-22 calendar season, which will run until April 2022.