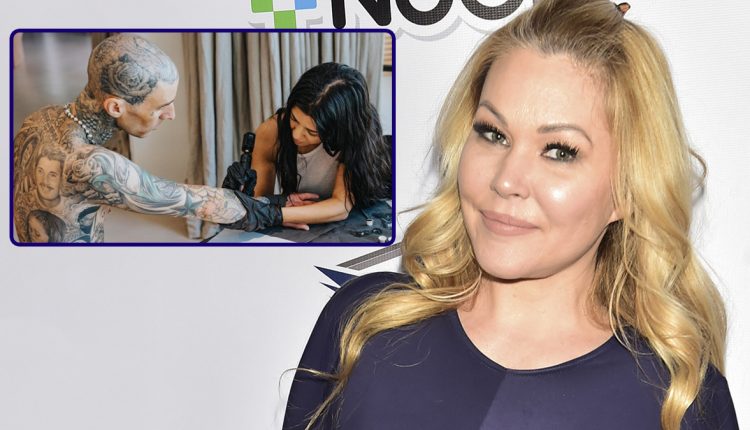 Shanna Moalker, the model and ex-wife of Travis Barker, recently got a tattoo of the latter’s first name removed from her wrist. On Friday, the 46-year-old former Miss USA winner shared footage on her Instagram Story getting a tattoo of her ex-husband’s first name removed from her wrist. Moakler shared behind-the-scenes footage at a doctor’s office where she received lidocaine injections into her wrist before getting it lasered off. Kourtney Kardashian Inks ‘I Love You’ Tattoo on Boyfriend Travis Barker’s Arm (Watch Video).

“The good news about lidocaine is once the first injection goes in it kind of numbs a little bit so…,” Moakler said. Upon the completion of her session, she said, “That is intense but it is worth it!” Per Page Six, Moakler’s tattoo removal comes just days after she shaded Barker’s relationship with Kourtney Kardashian. She told People magazine on Thursday about the new couple, “I am very much over my ex. However, do I think some of the PDA that he’s doing with her is weird? [Yes].” Kourtney Kardashian’s Relationship With Travis Barker Makes Scott Disick ‘Uncomfortable’.

The pageant queen and Playboy pinup was married to the 45-year-old Barker from 2004 until 2008. They shared two children: a daughter 15-year-old Alabama and a 17-year-old son named Landon. She is also a mom to 22-year-old Atiana whose father is former pro boxer Oscar De Hoya. As reported by People magazine, most recently, Barker has been showering the 42-year-old Kardashian with lavish gifts over the last few months. The reality TV star has also gone public with the blossoming romance on social media.

“The movie, ‘True Romance,’ that I feel like they’ve been bonding over was the theme of our wedding. Our daughter’s named after the character in the movie. Flying banners overhead like we did on ‘Meet the Barkers.’ Stuff like that… I just think it’s weird,” Moakler told People magazine. As reported by People magazine, Moakler insisted that she feels “no ill will” against the couple. “I am really, genuinely happy for him. I want the father of my kids to be happy and to have a partner that makes him happy … and a better father. As long as she is good to my children, that’s truly all I really care about,” she said.

“My kids seem to really like her and her family, so that is key,” Moakler added. The older sister of Kim Kardashian shares three children with former longtime partner Scott Disick: sons 11-year-old Mason and 6-year-old Reign and 8-year-old daughter Penelope.