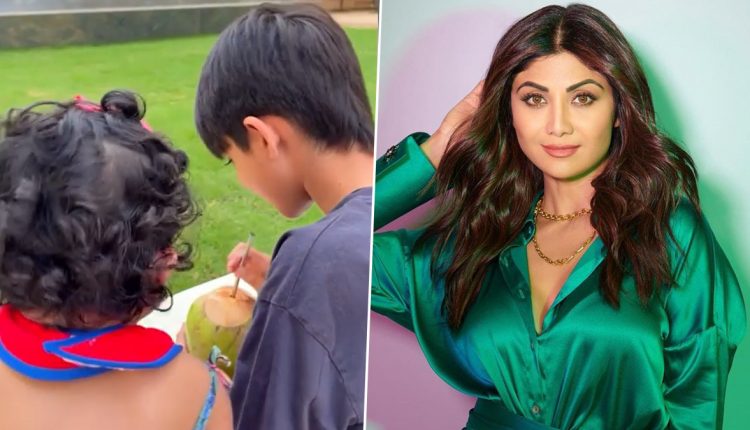 Actress Shilpa Shetty Kundra posted a video of her kids Viaan and Samisha on Instagram, to mark National Brother’s Day on Monday. In the video, Viaan is drinking coconut water and Samisha is trying her best to get some of it. Viaan is seen pulling her leg and saying, “Yes madam, do you want?” and “No, I don’t know you”. He finally gives her some, and Shilpa can be heard saying: “Sharing is caring.” Hungama 2: Shilpa Shetty, Paresh Rawal’s Comedy to Skip Theatres as It Heads For a Digital Release.

The actress captioned the post as: “Having a younger sibling somehow makes the older one responsible, protective, mature, and even territorial (I would know!) I’ve had Rakhi brothers much later in life, but Samisha is lucky to have a real one. To see these visuals just makes my heart melt Priceless!! Happy Brother’s Day.” Hungama 2: Shilpa Shetty, Paresh Rawal’s Comedy to Skip Theatres as It Heads For a Digital Release.

Last week, Viaan turned nine and Shilpa gifted him a pet dog who they named Truffle. Shilpa married businessman Raj Kundra on November 22 2009. They were blessed with Viaan on May 21, 2012 and Samisha on February 15, 2020. The actress, who was last seen on screen in the film “Apne” in June 2007, has the films “Nikamma” and “Hungama 2” lined up.

(The above story first appeared on Scoop Buddy on May 24, 2021 06:39 PM IST. For more news and updates on politics, world, sports, entertainment and lifestyle, log on to our website scoopbuddy.com).